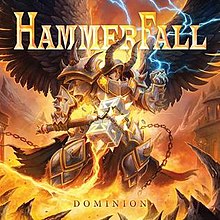 On May 3, 2019 the first single of the new HammerFall album ‘Dominion’, called ,,(We Make) Sweden Rock” was released and what a great song it is. This true powerful metal track is a tribute to several metal bands originating from Sweden, think of Malmsteen, At The Gates, Heavy Load, In Flames, Europe, Unleashed, Candlemass and so on. The rest of this ‘Dominion’ album of course features that typical solid, safe and very recognisable HammerFall sound, which we are familiar with from their previous ten albums. If you say HammerFall, you hear what you get, true power metal with speed metal elements and power metal anthems galore. However, ‘Dominion’ truly shows some greater degree of energy and enthusiasm, making this album a must for power metal fans all over the world. Just listen to the more than excellent opening track ,,Never Forgive, Never Forget”, the almost “brutal” song ,,Testify” (with excellent shredding), ,,Scars Of A Generation” and ,,Bloodline”, which will become live staples for HammerFall in the near future without any doubt. Besides this energetic and up-tempo song material Hammerfall also gives you two very decent ballads, being: ,,Second To None” and ,,And Yet I Smile”. All in all I have to say that HammerFall did it again, as ‘Dominion’ is one of their best albums so far; and that is probably a cliché, but also very true. In addition, to end with another cliché: Play ‘Dominion’ fucking LOUD!!!!