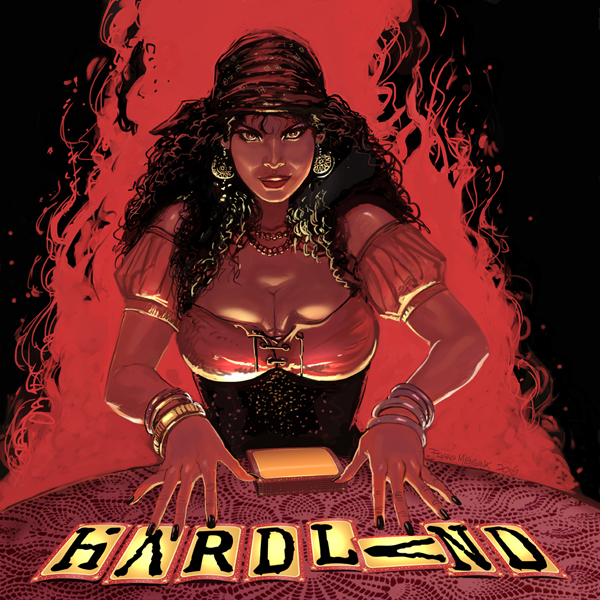 Hardland from The Netherlands can be seen as a musical adventure that singers/guitarists Paul Evers and Aeiko Venema started some years ago. Just making music, fooling around, no pressure and no real expectations. During moving on with their little project friends and fellow musicians kept encouraging the duo to take this further and that the material that they had come up with was too good not be released at some stage. So drummer Eric Gijsen got recruited and slowly but surely this thing that had started as an innocent hobby became a real band called Hardland. And here we have it, the first real fruit of their hard labour in the form of a ten track CD, professionally recorded, mixed and mastered and now available for the whole world. I must say that I am pleasantly surprised by the overall quality of the recordings and the performance. Still, there are a few things that Hardland needs to work on. In some songs you can hear a broad Dutch accent in the vocals (,,LifesaBitch’’ for instance). Not that that is a real problem, I know a guy that has been around for 50 years with a strong German and nasal accent and he is a multi-millionaire now, or not Klaus Meine? The band mixes melodic rock, AOR and hard rock with strong guitar work, decent song structures and a professional production. My favourite though is the instrumental ,,Interstellar Traveller’’ driving on a powerful guitar riff and juicy keyboards, up tempo and just a joy to the ears, complete with a catchy theme. Style wise you could see Hardland trying to create a bridge between classic melodic heavy rock/AOR from the eighties and nineties, melted into a modern and up beat sound and production. And I think they have succeeded in that. Songs that further stand out for me are ,,Hot Gypsy’’ (the first single for which the band made a clip, so look on You Tube or their website for that), ,,Until The Night Is Through’’, ,,Say It’’ and the merry opener ,,Any Way You Want It’’. If you have a problem locating the CD, check out their website www.hardland.net. You will find it there and a lot more and I believe they have a created a band page on Headbangerslifestyle.com as well.