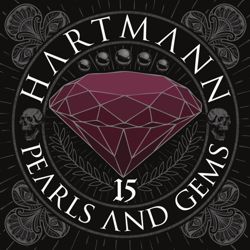 German guitarist/singer/composer/producer Oliver Hartmann celebrates the fact that his band Hartmann has been around for a cool fifteen years with a new album that can be divided in three chapters. More about that later. Oliver has been around a bit longer than 15 years though being active in the band At Vance, the Pink Floyd tribute formation Echoes and he works together with Tobias Sammet in Avantasia plus some other projects where he participated (when you look at his past Oliver has been pretty busy). But his main thing is the band Hartmann with whom he released no less than eight studio and live albums during these fifteen years. The latest release has three chapters. The first five songs are latest studio tracks, although it includes a remix of the track ,,Glow’’ that was released in 2016 when the band released the CD ‘Shadows & Silhouettes’, songs six until ten are cover versions of some known songs and the record ends with five live songs that were recorded on several occasions throughout the years (but all in the same venue in Aschaffenburg, Germany). The studio tracks are absolutely top notch melodic heavy/hard rock with as most astonishing fact the fantastic voice of Oliver Hartmann. A German that sings without an accent is a rarity but mister Hartmann is extremely impressive on ,,Glow’’ and the more rocking tracks ,,Can’t Stop This Train’’, ,,You Will Make It’’ (kick ass version) and ,,Walking On A Thin Line’’ and the ballad ,,How Does It Feel’’ (which could have been on a Gotthard album). Also a compliment for the outstanding sound thanks to Oliver Hartmann and co-producer Sasha Paeth. The covers that are featured are in a way quite surprising as well. The only track that does not do it for me is ,,Street Café’’ from the Australian band Icehouse, but that is mainly because I never liked Icehouse. Quite energetic is the Jermaine Jackson/Pia Zadora cover ,,When The Rain Begins To Fall’’ (Oliver doing a duet with Ina Moran of Avantasia) while famous composer/singer Billy Joel never ever imagined that his track ,,I Go To Extremes’’ could sound so heavy in Hartmann’s version. The same goes for ,,Uninvited’’ originally sung by Alanis Morissette, the Hartmann swing might not be super spectacular but at least Oliver carries the song with dignity. It is the softest song on the record and maybe does not fit so well with the rest of the material. Last not certainly not the least of the cover section is a interpretation of Free’s ,,Fire And Water’’, obviously not as good as the original sung by Paul Rodgers but it must be said that Hartmann has not failed here, far from. The five live songs prove without a doubt that the strength of this band (Mario Reck-guitar, Markus Kullman-drums and Armin Donderer on bass plus mister Hartmann himself) lies on stage. Energetic, hard, heavy and a great end to a in my mind quite good CD. Especially the in 2009 recorded version of ,,Brothers’’, with Tobias Sammet singing along sounds cool while ,,What If I’’, ,,The Sun’s Still Rising’’, ,,Don’t Give Up Your Dream’’ (with some Coverdale-influences in the singing) and ,,Out In The Cold’’ (with the obligate involvement of the audience) all prove what I stated above. The stage is the ideal setting for this band. Let’s see what the next 15 years have in store for Hartmann!