HEART-Live At The Royal Albert Hall 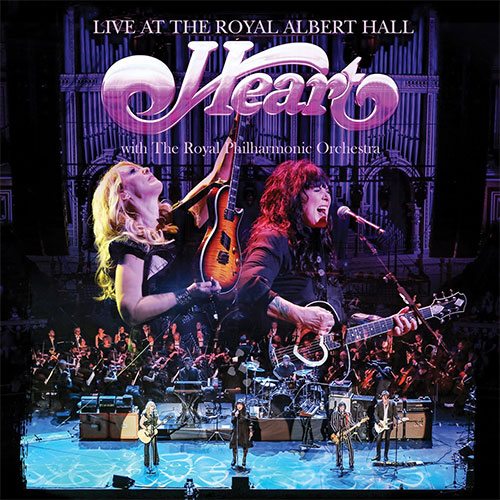 HEART-Live At The Royal Albert Hall

After the mediocre albums `Red Velvet Car’ and `Fanatic’ it was a big relief that Heart released `Beautiful Broken’ in 2016. On that album Ann and Nancy Wilson once again found the right combination of ballads and rockers that made them world famous. In June 2016 Heart played at the famous Royal Albert Hall and invited The Royal Philharmonic Orchestra to join them on stage for a prestigious and sold out concert. Cameras and microphones were installed to capture the event for a separate DVD and a separate CD release that came out early December 2016. Being a follower for four decades now the Wilson ladies have never stopped to amaze me. Both in their sixties now, their commitment and musical exploitations seem to be more intense than ever before. Ann has not lost an inch of her vocal capacities and proves once again on this CD and DVD that she is by far the best female rock singer over the last four decades. This is a journey through time indeed, but as Ann says during the concert: ‘what’s a few decades between friends?’ The band kicks off with their first ever hit ,,Magic Man’’ before the orchestra members take their places and help out through the bulk of the concert, giving songs like ,,Alone’’, ,,What About Love’’, ,,Sweet Darlin’’’, ,,These Dreams’’ and ,,Dreamboat Annie’’ some extra flavour. There are also several songs from ‘Beautiful Broken’ featured like ,,I Jump,, ,,Two’’ and the crushing heavy tittle track (without James Hetfield of course). ,,Crazy On You’’ (Heart’s second hit) concludes the regular concert and we get the encores without the orchestra. The gig ends just as heavy it began with cracking versions of ,,Barracuda’’ and ,,Kick It Out’’ (both from Heart’s second album ‘Little Queen’). This registration sums up that what Heart is all about. A group that has a perfect eye for what their audience wants to hear. Just when you think the concert can use a boost after a few more laid back tracks, Heart bursts out with heavy rockers like ,,Beautiful Broken’’ or even ,,Marshallah!’’ (one of the few really worthwhile tracks on ‘Fanatic’). Personally I regret that songs like ,,Dog & Butterfly’’, ,,Lighter Touch’’ and the magical ,,Mistral Wind’’ are not featured. These tracks would have been perfect to get an ‘orchestra’ treatment, but when you have been around for so long as Heart has been, it is difficult to please everyone I suppose.