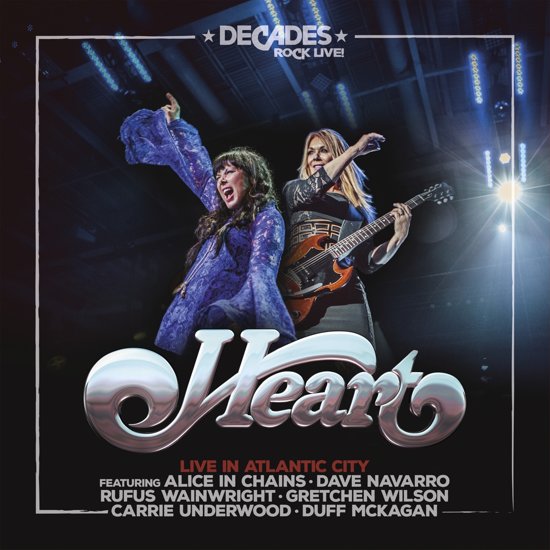 It strikes me as odd that you record a show with a bunch of guests present in 2006 in Atlantic City that has been broadcasted already in the series VH1 Decades Rock Hours, and then decide to release the whole remastered and remixed shebang on CD, DVD and Blu-Ray early 2019! But then things have not gone smoothly in the Heart camp have they? While on tour promoting their studio album ‘Beautiful Broken’ an incident occurred between Ann Wilson’s husband Dean Wetter and Nancy Wilson’s two 16 year old twins. The tour was finished but the sisters did not talk to each other anymore and started their own projects. After a 3 year hiatus the band very recently announced to go on tour in the USA again with Joan Jett being one of the supports. So I suppose if that tour runs smoothly Heart might release a new studio album maybe later this year or in 2020. In the mean time we have to do with this live CD that features several guests like guitarist Dave Navarro, Duff McKagan (both on guitar), singer Rufus Wainwright, singer Gretchen Wilson (not related to Ann and Nancy), country rock singer Carrie Underwood and the band Alice In Chains (performing two of their own songs, one sung by Phil Anselmo and the other by William Duvall with Ann Wilson on background vocals). This CD/DVD/Blu-Ray is a very mixed bag indeed. It features versions of very early Heart material (from the first 4 albums mainly), the smash hit ,,Alone’’, some Led Zeppelin material, and two Alice In Chains songs (,,Would?’’ and ,,Rooster’’). It also shows again that for other singers it is quite difficult to sing tracks that have been recorded by the best female rock singer ever: Ann Wilson. Although Gretchen Wilson and Carrie Underwood are big vocal forces on their own and do a good job on this record but when Ann Wilson sings it just sounds as it should sound. Especially one of the better Heart ballads ever ,,Dog And Butterfly’’ is not an easy one as Rufus Wainwright can tell you. It is at moments just painful to hear him tackle this song, it is too much for his thin voice, so exit stage to your left Rufus and keep walking!  Although this record does have a lot of good moments the overall feeling for me is that ‘Live In Atlantic City’ is at times just a musical party where it does not seem to matter if you lay down an immaculate performance or not. The enthusiasm is there but every now and then the record makes a slightly chaotic impression. If you take that in mind ‘Live In Atlantic City’ will have enough quality for the Heart fan in general.