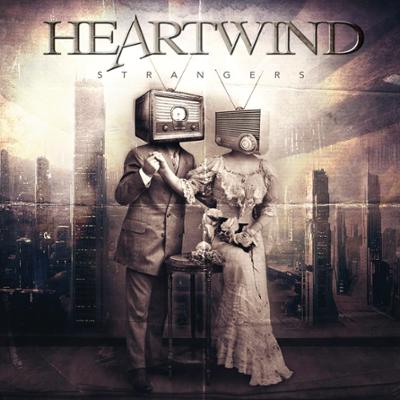 Some two years ago this webzine was reasonably positive about the debut album ’Higher And Higher’ of this Swedish group around keyboardist Mikael Rosengren and guitarist Goran Engvall. The band played a blend of AOR and more energetic melodic hard rock and on the second album that combination is again blended together and also fine-tuned.

The group had some change of personnel though. Female vocalist Nina Soderquist is now a steady member after guesting on ‘Higher And Higher’. Singer German Pascual has made place for Stefan Nykvist who added a lot more power to the proceedings. Engvall on this album has also played bass and as was the case on the debut there are a few guests participating like Eclipse’s Erik Martensson, Eric Laver of Dynazty and Mats Leven (ex-Candlemass). So on the vocal front ‘Strangers’ leaves no room for any doubt. The music has been given some more ‘body’ in the form of heavier guitars, extra power and tempo and (not unimportant) better songs. Okay, sometimes the band has looked at the repertoire of other bands perhaps too obvious like for instance Journey (listen to the intro of ,,Trial’’ where the keys sound like Journey’s ,,Separate Ways’’) but it is not the easiest thing to sound all original in this genre all the time and all the way. So don’t pay too much attention to some similarities with some other bands as the overall result that Heartwind presents on ‘Strangers’ is of constant quality and an improvement on the debut that already was very worthwhile. No wonder that Escape Music jumped at the chance to get this group onto their label. If you like ‘Higher And Higher’ you will most likely agree with me that with songs like ,,Strangers In The Night’’ (Nykvist blasting it out), ,,Line Of Fire’’ (Nina Soderquist blasting it out) and several others where they share the singing Heartwind shows a big improvement, also being catapulted forward by the energetic sound and production. Not much wrong with this one!