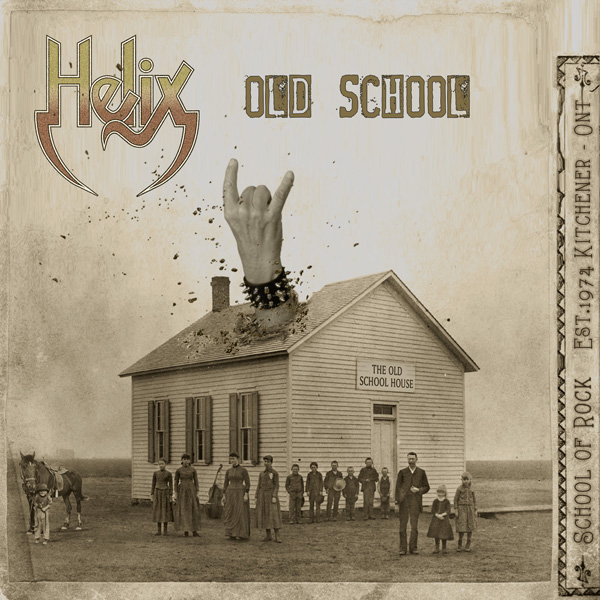 The Canadian band Helix first came to the surface in 1979 with the album ‘Breaking Loose’. Through the years the band around singer Brian Vollmer and guitarist Paul Hackman operated in the second division of the melodic/glam rock scene. Although Helix managed to get a major record deal with Capitol in the eighties their albums were not extremely successful with the exception perhaps of ‘No Rest For The Wicked’, that must be seen as their best effort ever. The albums kept coming, there were many line-up changes throughout the years (sometimes caused by tragic circumstances as Paul Hackman died on the way back from a concert in July 1992), the band was inactive for a while, got back together and started releasing albums again, the last one being ‘Bastard Of The Blues’ in 2014. The only member that was there from day one until now is Brian Vollmer and last year he was cleaning up his ‘musical’ closet discovering a bunch of unreleased and in some cases unfinished songs. He decided to save what could be saved, some songs were newly mixed or re-recorded and that is how this latest record ‘Old School’ has come about. There were even some recordings found with a contribution from Paul Hackman to whose memory this record is dedicated. For fans of this band ‘Old School’ is probably a must have thing. For the general rock fan ‘Old School’ will most certainly not be a record to worry about. The ten songs sum up perfectly the style of Helix. This band has always been energetic but also very predictable. Their classic hard rock has its moments when the tempo goes up, the guitar work is okay but Vollmer has never been a top notch singer. Especially on the live in the studio recorded soppy ballad ,,Cheers’’ his singing is on the shaky side. But to be fair there are some decent moments there like the guitar dominated ,,Whiskey Bent And Hell Bound’’, ,,Coming Back With Bigger Guns’’ while also ,,If Tears Could Talk’’ has a nice melody. A big plus is the front and cover design of the album which is indeed very old school. This record won’t send any shockwaves through metal land. It is a mediocre sign of life from a band that always knocked on the door but never really got their foot through it.  But I am sure that the real fans of Helix will welcome these unreleased songs into their collection.