HELLHAVEN-Anywhere Out Of The World 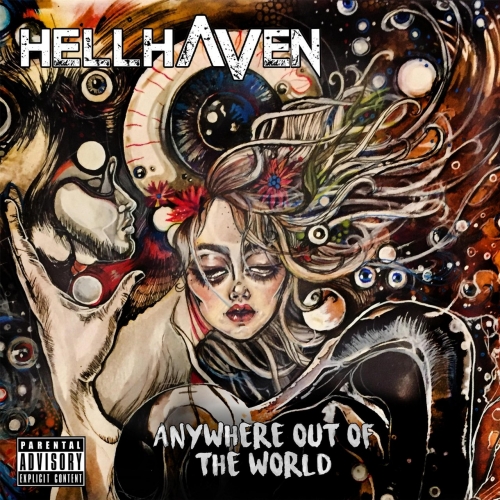 HELLHAVEN-Anywhere Out Of The World

Hellhaven is the name of this progressive metal band from Poland we need to keep an eye out for. Being around since 2010, releasing one EP (`Art For Art’s Sake’) and one full-length CD (`Beyond The Frontier’), the band reports back to the frontline of progressive rock with their sublime piece of work `Anywhere Out Of The World’, which will appeal to a wide array of fans in the genre. Sirens immediately call to action in the powerful title track, blending post rock with metal. Progressive breaks and impressive drum shuffles pull forward while guitars riff along in slick harmony. Three minutes in the song blooms with a strong haunting chorus and sublime vocal interaction. Highly melodic and impressively arranged it takes you to the edge of your seat. Bedazzling musical craftsmanship underneath an exquisite guitar solo take the song to an unexpected high and abrupt end. Just when the tease started ,,Anywhere Out Of The World’’ dies out and takes us into the haunting and mysterious ,,Ever Dream This Man?’’. The song lushly pulls forward to unload into a funky and tense-laden mid section, complete with trumpet solo. It’s hard to grasp, but it certainly fits the atmosphere without discarding the elusive progressive sophisticated edge of Hellhaven. Packing more metal than any track on the album is the Ayreon-esque ,,First Step Is The Hardest’’ which kicks in with ominous guitar-keyboard interaction and hypnotizing melodies. The atmosphere is tense and disturbed kick the song into gear with psychotic agony unloading. Topping it off with some precisely executed riffs and tasty guitar solo the song is a mix of emotions pumped up by swirling keys and intriguing string arrangement. ,,Res Sacra Miser’’ is another dense and creepy progressive tune with cinematic appeal and interesting mood swings. Propelled by tasty guitar licks it lingers onwards and slowly picks up pace to suddenly surprise with stop motion riffs and anger laden emotional hauls. The diversity of styles combined is creating an atmosphere totally unique. An epical fierce midsection with haunting vocals and chants unleash a dramatic debate of styles almost turning it into a musical frenzy. The mood is diverse and hectic but it suddenly settles down in typical comfortable Hellhaven style. The odd opening of Middle Eastern mystic in ,,They Rule The World’’ is kept alive by a Phrygian scale keenly embedded in the jazzy ambient harmonies of this intriguing composition. The song contradicts day and night with the hectic and turbulence of the fierce ,,Overview Effect’’ which seems deeply rooted in the English classic prog era. Pompous orchestrated chorus and keyboard driven it nests in your head on the spot. King Crimson being pulled into the present, inflicted with double bass interaction and fierce guitar riffing, this track pack action and panache. Progressive scales and eruptions of jazz scales open ,,On Earth As It Is In Heaven’’, a song with lush turmoil and sticky melodies. 6:23 minutes of melodic progressive perfection which reveals more and more of its beauty with every spin of the disc. Hellhaven even bring in a scratch to etch the polished surface of this impressive tune. Captivating, engaging and melodic is the last song of this musical journey; ,,The Dawn & Possibility Of An Island’’, which is a musical journey much like the entire album. It rocks melodic and blooms with intellectually embedded drum patterns and awesome guitar work. The keyboards are spot on as are the synthesizer elements that give it the spacy edge separating it from the vast majority of progressive rock bands. It clocks well over 9 minutes but it must have been timed in a parallel universe, as it feels compact and pointy.
The dynamics of Hellhaven’s `Anywhere Out Of The World’ are impressive. The album is packed with action without losing its symphonic and pompous magnitude, and it hindsight’s the greatness of classic prog bands of the seventies without lacking a modern vision. A truly unique and impressive structured album is the result. Without willing to make this another song by song run-through, I couldn’t ignore my gut feeling and had to put my pen to paper in order to capture the thoughts and emotions captured in this remarkable endeavour. `Anywhere Out Of The World’ draws you in immediately and tends to keep doing so for a long, long time to follow… IMPRESSIVE!