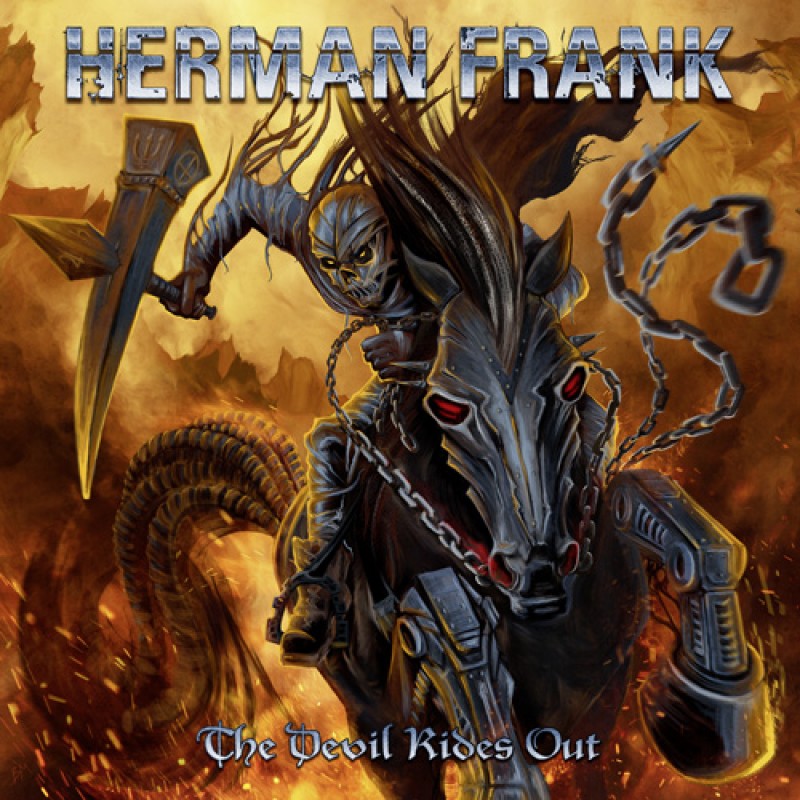 November 8, 2016 by Michel van de Moosdijk - More about our team

Earlier in 2016 (or was it at the end of 2015?) guitarist Herman Frank (Moon’Doc/Victory) left Accept. No idea why that happened but it has given Herman the chance and opportunity to start working on a third CD under his own name. Earlier he released ‘Loyal To None’ and ‘Right In The Guts’, recorded and released while he was involved with Accept. Now there was time to work properly on ‘The Devil Rides Out’. Singer Rick Altzi (Masterplan) is helping out again, also available to Herman were bass player Michael Muller (Jaded Heart) and drummer Andre Hilgers (Rage). According to Herman this permanent line-up will also be able to promote this new record as well by taking the stage in the near future. From the beginning (,,Running Back’’) until the end (,,I Want It All’’) Herman and his mates go full speed ahead, taking no prisoners in their full frontal melodic heavy metal attack with no holds barred. Maybe a bit old fashioned style wise but even in 2016 still effective and bloody entertaining as well. Every now and then it is just necessary to listen to an album that has a ‘balls to the wall’ attitude. With that I do not say that Herman Frank just continues in the Accept style but there are without any doubt some similarities. Not strange if you have been part of a band for such a long time as Herman has been with Accept. But it would not do the musicians on this metal monster any justice by describing this record as a continuation of Accept. No, singer Rick Altzi is his own man and I find him on this record more convincing and better than the albums I have heard of Masterplan with him singing. He sounds a lot rougher and more ‘in your face’. And Herman himself has a lot more room as well in playing guitar. There are no neo classical guitar parts here. It is straight ahead riffing, heavy hooks and scorching solos galore built on a thunderous foundation of bass and drums in songs like ,,Shout’’, ,,License To Kill‘’, ,,Dead Or Alive’’, ,,Ballhog Zone’’, ,,Stone Cold’’, ,,Thunder Or Madness’’ and ,,Run For Cover’’. Old fashioned style heavy metal still has its valid and attractive points. There are twelve of them on ‘The Devil Rides Out’ (the limited Digipak contains an extra track called ,,You Don’t Know’’).