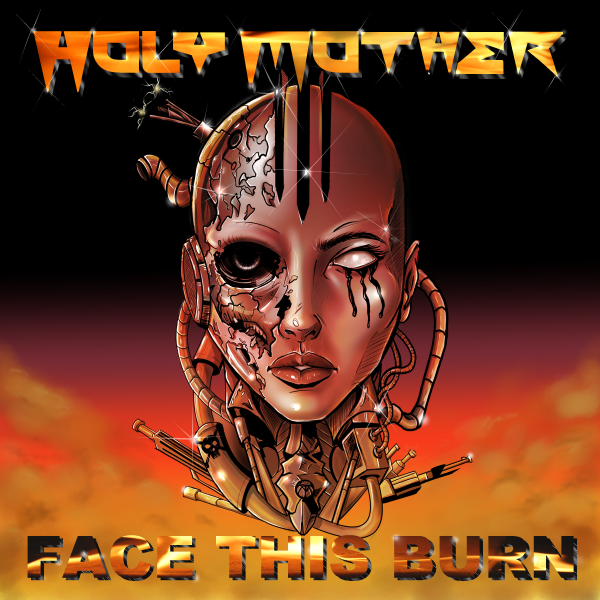 After a hiatus of some 18 years US metal band Holy Mother makes a comeback with their seventh studio CD ‘Face This Burn’. The band was active between 1995 and 2003, releasing six albums. Core members Mike Tirelli (vocals) and James Harris (drums) resurrected the band this time unfortunately without original bass player Randy Coven who passed away some years ago. They recruited guitarist Greg Giordano (who also played bass) and they have a touring line-up ready and waiting to go. Mike Tirelli has not been sitting still since 2003. He has worked with Messiah’s Kiss, Riot V and launched a new project Rising Five a couple of years ago, releasing an EP. Also you can find on YouTube some material that he did with Band Geeks, with whom Mike performs material from Whitesnake and Black Sabbath, proving to be a really all round  vocalist.

On ‘Face This Burn’ Tirelli returns (most of the time) to pure power metal. And although he has aged his vocal pipes and range have not suffered at all it seems. He sings like a young God, high pitched where necessary (the title track), powerful and with plenty of variation. The songs are not bad either as the band has hit the jackpot by adding Giordano to the line-up who fattens up the album with his monster riffs and (here and there) shredding. Holy Mother never hit the big time status in the day and that most likely will not happen this time either. But if you are into real heavy metal it may be an idea to check out ‘Face This Burn’ as this sounds energetic, brutal at times and quite powerful as well. At least Holy Mother returns with a bit of a bang after being away for so long. And be ready for some surprises as well. Besides old school metal Holy Mother also has recorded a daring version of ,,Superstar’’, a song made famous by the seventies pop duo The Carpenters. Obviously the band has beefed their version up but it remains a bit odd to hear this (now power) ballad just after ,,The River’’, one of the fastest and hardest songs on the album. It proves tough that Holy Mother tries something different at times and does not only rely on old school power metal.