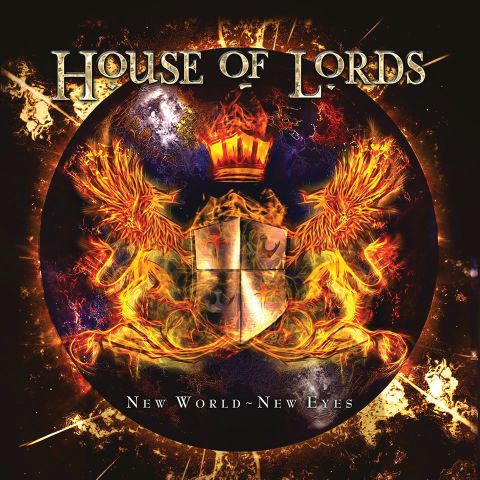 In 2018 House Of Lords singer James Christian released his fourth solo-album ‘Craving’. What I liked particularly about that release was the balance of the CD. There was something for everyone, heavy rock, AOR and even a flirt with pop rock. Also the 2017 House Of Lords album ‘Saint Of The Lost Soul’ was quite entertaining although the album could not match the level of the first three albums that were recorded late eighties/early nineties. But ever since starting the band up again James Christian has been the man guarding the quality that the band has become liked for and it is good to hear that on ‘New World New Eyes’ nothing has really changed. Or has it? Well, the overall level of the song writing has certainly received a boost for the better as James involved prolific song writers like Mark Spiro (also on back ground vocals) and Tommy Denander. That has certainly helped giving this album a steady quality. Only the track ,,$ 5 Bucks Of Gasoline’’ does not really do it for me but for the rest there is not much to complain about the songs. They are melodic, accessible and full of variation. Maybe I would not have put ,,Change (What’s It Gonna Take)’’ on the first spot on the record as it is a bit of a soft start to the whole proceedings but guitarist Jimi Bell has plenty to say for himself on the rest of the CD being there very prominent in a song like ,,We’re All That We Got’’ with brilliant vocals and plenty of variation in that song. There is one thing that is not so impressive on ‘New World New Eyes’ and that is the overall drum sound of BJ Zampa. It is a bit driven towards the back ground at stages, not giving the songs that extra kick that is sometimes needed (,,Better Off Broken’’ is a heavy rocker that could have been more impressive with that extra kick from the drums). As far as I know James Christian has produced the album himself, so maybe in future it might work better if an independent person does that, but then it could be a matter of budget that just might not be there. But at the end of the day this is a record that is very satisfactory indeed. House Of Lords is not that band with that very big ‘arena’ sound anymore but has developed into a very versatile rock band that still has plenty to offer. Has the band though added anything to their legacy with this CD by doing things different? That is the question that can only be answered by the people who are into this band and their style. If sales figures are good enough to justify another album in the future, obviously James Christian is still on the right path and like I said ‘New World New Eyes’ might not be super spectacular but is steady in its quality and performance.