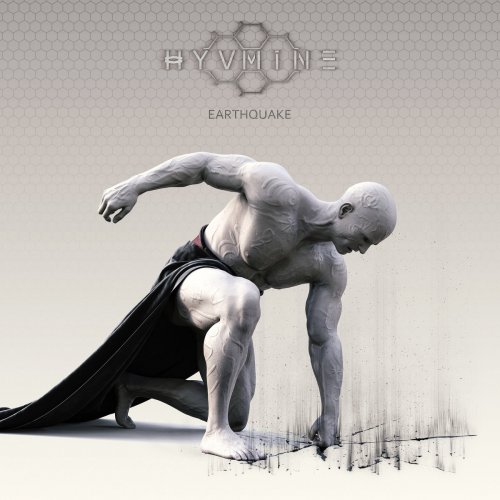 2018 not yet managed to get me aroused. Musically nothing sparked my enthusiasm until I came across `Earthquake’, the album that drew my attention with its appealing artwork. The logo of the band intertwined the greyscaled monster smashing the face of the earth. But it’s all about the music presented on Hyvmine’s debut, let’s be honest.
The Los Angeles based quartet around vocalist and guitar player extraordinaire Al Joseph operates in the progressive field but combines their metallic cocktail with modern heavy pop of bands such as Nickelback and Alter Bridge. And it is Joseph who draws attention with his fluent style of playing. He easily drops scorching solos upon shit heavy riffs without losing the melodic aspect. Keenly interlacing his melodic riffs with keyboards/piano the songs tend to flower into melodic direction rather than the progressive metal expected. Sudden twists and turns however keep you focused and intrigue the mind. ,,Shift” has billboard pretentions with its ear mingling choirs. ,,Mirror Castle” and ,,All Of Creation” with stop and go structures unveil short-lived guitar eruptions. But it’s songs like the progressively evolving and aggressive ,,Shogun” that truly capture your attention. Bedazzling riffs with buzz saw apparel pull it forward and the short guitar solos are impressive. True fret board magic delivered by Joseph, with fluent and sharp arpeggios covering the blunt edges of the song’s impeccable framework. Hammer ons as sharp as razors fly back and forth, harnessing power and precision. These are songs we want to hear from this talented quartet. Check out the riff and bass interaction and frantic drumming in the anger laden ,,Fire Escape” and you’ll catch my drift. ,,Elysium” is another highlight but packs more melancholy than metal. Interesting in its structure and impressive guitar shred the song blooms in withering beauty. With a lot going on underneath the poppy melody, the song grips and easily lands comfort without losing its power. The solo again is of jaw dropping magnitude. The crunch offered in ,,Great Divide” is to distort to attract, and the captivating drum patterns certainly deserve more clarity and less grunge. Especially the songs’ middle section is impressive but drowns in the well of tones. The song would have benefited as it packs plenty of power to throw you over on the spot. Old school heavy metal producers would have twisted the knobs and killed off the down tuned overhaul. ,,Cliffhanger” is more metal nurtured and does pack the punch and crunch that aligns with the anxiety it depicts. The song ends abrupt to return unexpectedly with a melancholic and crisp guitar outro.
It’s a shame Hyvmine doesn’t leap into metal rather than clinging to pop metal. The band and Joseph are at their best when firing on all engines (,,Fire Escape”). Bombardments of riff-drum interaction like in ,,Shogun” display intensity and craftsmanship. Steering away from the mellow and poppy harmonies, the band can easily inject their powerful hooks with melody before tilting. In my humble opinion Hyvmine should drop the pop chords and modern touches in favour of heavy metal riffs to thrive. They have the skills and talents and I will most certainly keep an eye out for their next release.