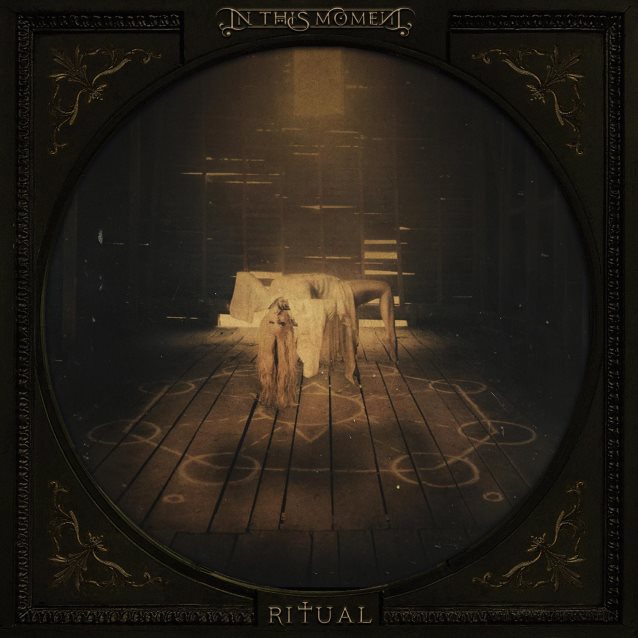 To be honest I have never really listened to albums of the American metal core band In This Moment, formed by vocalist Maria Brink and guitar player Chris Howorth in the year 2005. But, now, as I have the honor to review their new album called ‘Ritual’, I have listened to their latest CD a lot. ‘Ritual’ is the sixth studio album of In This Moment and the album was again produced by Kevin Churko, who is known from his cooperation with Ozzy and Papa Roach. ‘Ritual’ sees another musical approach, this new album has a rawer, in your face sound, as the other five albums were much more theatrical and electronic based. The eleven new songs, plus one cover, are definitely more guitar driven, stripped down and the vocals of Brink are still very dominant, emotional and rather good. The theme of the album was inspired by Maria Brink’s visit to Salem – think burning witches and stuff – and therefore the songs almost all have a rather dark nature. Opener ,,Salvation” is filled with mysterious Latin chants, followed by the first single called ,,Oh Lord”; which is a rather bluesy track. ,,Black Wedding”, probably inspired by Billy Idol’s ,,White Wedding”  – check the chorus – features Judas Priest icon Rob Halford. ,,Twin Flames” (mysterious), ,,Half God Half Devil” (heavy) and ,,No Me Importa”( ,,Leave Me Alone’’), with a very catchy chorus, are the highlights of this must have album for In This Moment fans. However, ,,Witching Hour” and ,,Roots” are rather mediocre (read: boring) songs and the Phil Collins cover ,,In The Air Tonight” – I hate covers by the way – is something you really need to get used to…. All in all, not a bad effort of In This Moment and probably their best album so far, but I think that they can even do better as the afore mentioned highlights prove this. Advice: play it LOUD!