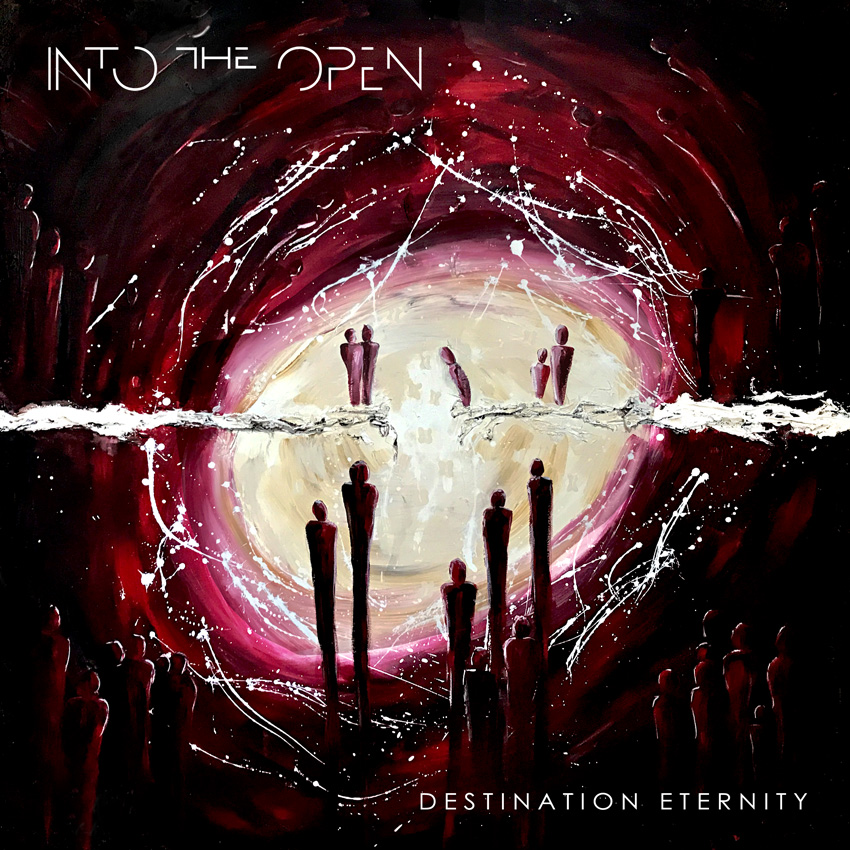 Into The Open is the project of Sander Heerings (The Dust Connection) and Jan Willem Ketelaers of Knight Area and Ayreon fame, releasing their debut album `Destination Eternity’, a concept album about the journey of a soul to its final destination. The storyboard is crafted around the idea of souls evolution through a mere infinite cycle of birth, life and death, until the final stage of eternal life.

From the opening tones of the spheric ,,Originals” to the dying notes of the etheric ,,Half Song” the album enrols in sheer beauty. The ethereal injection of the concept is reeling through the tracks upholding the storyline, while the music blooms and progresses in life cycles. ,,Birth” has a pulsating baseline throbbing like a heartbeat with Ketelaers oozing comfort. The song, as much as the rest of the albums, leans on neo-prog and melodic rock, with outbursts of emotion striking deep. Emotions keenly outlined by the creative arrangements that hold up the firm carcass of Into The Open. ,,Once” is a pleasant track opening with serene piano to shoot forward with withheld power unleashed by an intense riffs and tasteful solo of swirling keys. Ketelaers’ wailing vocals add extra lustre. It contrasts with the uplifting and pleasant ,,Back To The Days” before returning to form on the ominous prog eluding ,,Nostalgia” that paves the way in powerful fashion for the intense ,,Purpose”. The song is a piano ballad with appealing orchestration much like classic Kayak tracks. It wells with emotion question the souls evolution and possible rebirth. The almost 10 minute clocking ,,Judgement Day” is opened with tolling bells and almost nostalgic string arrangements reminiscent to Saint-Saëns ,,Dance Macabre”, before the track powers up. Judgement is casted reviewing the soul’s last life eluding in a duet like mid section. The progressive construction of the song with rolling drums and suspending guitar riff build tension as the story evolves. 6 minutes in a bass line ploughs almost aggrieved into a studded fierce guitar solo the blooms with progressive power and storms ,,Judgement Day” back to form. ,,Eternity” is the moment of hoisted enlightenment. The glorious moment of completion of a soul’s mission, finding an even more emotional moment during ,,Ride The Wind”, the duet between Maria Catharina (Robby Valentine) and Ketelaers. An emotional rollercoaster that peaks with a guitar solo by Marcel Coenen (Sun Caged, Ayreon) and intense keys in ELP fashion. ,,When The Crowd’s Are Gone” is my personal highlight of the album that opens with an insane guitar solo and hammering drums. It displays the craftsmanship and talents of musicians and creators of Into The Open able to construct another glorious topping moment. The album’s magnum opus followed by the eternal ,,Half Song” to make the story ebb with emotion instantly making the listener crave for a rerun of the story.

`Destination Eternity’ is an insanely wonderful melodic prog album. The concept is well thought about and the music to accompany and empower the story if pitch perfect. With the eternal cycle of the soul under the play button, you can create your own cycle before ,,Judgement Day” and have the soul’s solution at your disposal. Whether or not that was the idea behind the album, remains unanswered, but it definitely makes the album roll out differently. As pleasant as it unrolls at first spin, the more pleasant the album evolves (in line with the soul) having it played a couple of times. It keeps revealing more of its sheer beauty with every spin, making it one of neo-prog’s highlights of 2020. Must listen!