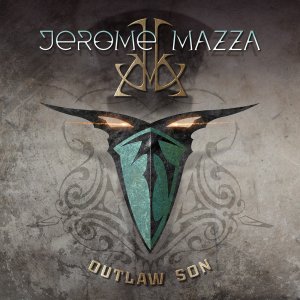 Together with guitarist Torben Enevoldsen working under the name Pinnacle Point singer/keyboardist Jerome Mazza surprised many with the 2016 album ‘Winds Of Change’. Sure, the resemblance with Kansas was undeniable and it raised the question why Kansas did not recruit Jerome as the replacement of the departed Steve Walsh as both singers had clear similarities in their vocal approach. In 2017 Jerome was invited as a guest vocalist for the ‘Black Butterfly’ album, a CD by Steve Walsh for Escape Music. Jerome did a duet with Steve and sang solo on the album as well, making that record one of the best melodic rock albums of 2017. Escape Music owner Khali Turk was so impressed with Jerome’s achievements that he quickly signed him up for his label and surrounded him with more or less the same team that recorded and produced ‘Black Butterfly’. That means that Swedish master Tommy Denander got involved on guitars, keyboards, production and co-writing the songs and also Brian J Anthony (bass/mixing and mastering), FM’s Steve Overland on background vocals and drummer Chris Metzger leaving Jerome Mazza free to concentrate on the writing and singing. If you are familiar with the two above mentioned albums I am sure that you will appreciate ‘Outlaw Son’ as it is packed with first class melodic rock material. The twelve songs are rich in variety, in some cases they are extremely catchy and they have enough balls (the title track) to brush away any scepticism you might have about the heaviness of the music. Mazza impresses all the way. For me the song ,,Undercover Love’’ has all the ingredients a classic melodic rock song should have: the vocals are superb, the chorus catchy, the guitar heavy. It is easy on the ear but is has also balls. And there are more of these kind of little jewels featured on ‘Outlaw Son’ but I am not going to describe them to the T for you. Because that would just spoil the fun of discovering for yourself how bloody good ‘Outlaw Son’ has become. And yes Tommy Denander is there as well with his trademark guitar sound on a song like ,,Song For The People’’. Ever since his Rainmaker CD and the Radio Active records so many years ago Tommy has developed a sound of his own, a sound that is able to blend in with any singer doing his thing, making sure a bit of extra class and familiarity is present without overtaking the limelight. That limelight is clearly on Jerome Mazza and the overall quality of the song material but what a joy it must have been for him to be able to count on a team that brings experience and unmatched quality to the table. Essential!