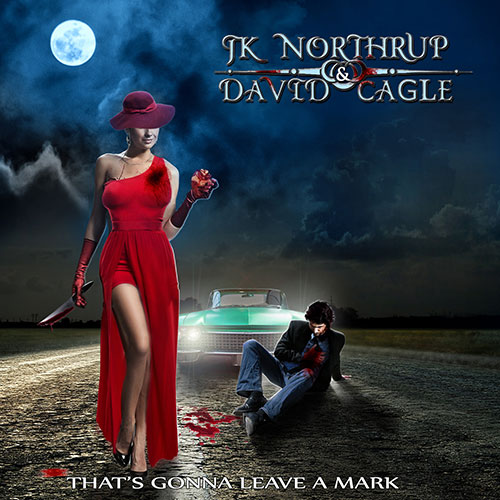 Guitarist JK Northrup has been around for years playing with singer Paul Shortino amongst others and not so long ago JK released the recordings of the band Gypsy Soul with singer Johnny Edwards on CD. A band that tried hard in the eighties to get signed but did not succeed. The last couple of years JK also does a lot of work for record companies like Melodic Rock and Escape Music as producer/engineer and remastering records. Also he launches very soon the band Mood Groove where the music will not be limited to heavy rock only. Mood Groove will bring music that is more allround and sophisticated and a bit different. But here we are talking about JK’s cooperation with vocalist David Cagle. On this one the duo assisted by bass player Larry Hart, keyboardist Eric Ragno and drummer Steve Brown plus a bunch of guest performers like Gunnar Nelson and Kelly Keeling on background vocals performs a mix between classic heavy rock and AOR. JK has penned all the music himself, making sure the CD has quite a robust yet melodic character and the necessary portion of variation. ‘That’s Gonna Leave A Mark’ is a pleasant album to hear as the songs are easy on the ear without being wimpy or cheesy. The base of the CD is pure heavy rock, the vocals and vocal arrangements give the CD an AOR flavour and that combination works well for JK and David Cagle, a guy that I had never heard of. It turns out that David Cagle is an independent studio singer whose voice fits excellent in this package. Can’t really come up with another singer in the genre that David can be compared with, but he proves on this CD that he is capable of singing different types of songs including a ballad like ,,Chasing Ghosts’’. I am not saying that this CD is going to cause a revolution but if you like bands like for instance Romeo Riot or Newman this CD is definitely one to get.