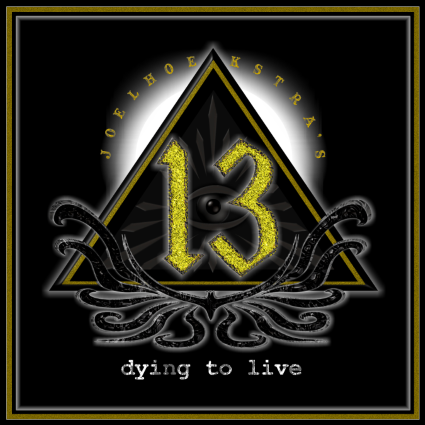 November 6, 2015 by Michel van de Moosdijk - More about our team

Joel Hoekstra is a busy man. At the moment he is a full member of Whitesnake (recent CD ‘The Purple Album’). He had also had spells in Night Ranger and Trans-Siberian Orchestra and he has got his own thing called Joel Hoekstra’s 13. Hoekstra has created a very versatile rock album together with a bunch of well known guests. Sir Russell Allen (Symphony X) and Jeff Scott Soto (no introduction needed) share lead vocals, Pride Of Lions vocalist Toby Hitchcock provides backing vocals, Vinny Appice (former Black Sabbath and Heaven and Hell) is the skin beater, Derek Sherinian (Black Country Communion) is on keyboards and Tony Franklin (ex-Blue Murder) plays bass. With all these great musicians participating it is no surprise that ‘Dying To Live’ is a very interesting and good album. With Hoekstra responsible for guitars, song writing and production there are eleven tracks to enjoy. De title song ,,Dying To Live’’ reminds me a little bit of the old Dio-days with a gritty vocal from Sir Russell. It is a moody song with several heavy parts that are accompanied by more laid back, melodic elements. There is also a role for Chloe Lowery (Trans-Siberian Orchestra) as she performs a great duet with Jeff Scott Soto on ,,What We Believe”, the last song of the album. Without a shadow of a doubt we dare to conclude that fans of melodic heavy rock have a lot to look forward to when listening to ‘Dying To Live’. It will be interesting to see what Joel Hoekstra (with a last name like that you sure do wonder if his ancestors come from The Netherlands) will achieve with Whitesnake as their above mentioned CD consists of old Deep Purple songs. How much room will he get from David Coverdale? We shall wait and see. For the moment we should be happy with this blockbuster!