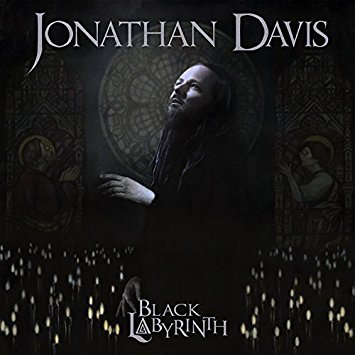 The rumour about a solo album of Korn singer Jonathan Davis is making its rounds since quite a while. Somehow, the moment to release his debut album never matched his work schedule with Korn. The main question about a solo record of every lead singer of a band is the same: do we really need it? Does it sound any different than the music he releases with his main band? Well, Jonathan always loved and loves to experiment with music. He is very open minded, which was in the past not always easy to digest for his fans. I remember a Korn show in Switzerland a couple of years back where Jonathan Davis opened up with a solo DJ set. The crowd barely recognized him and gave him their anger to feel. Well, `Black Labyrinth’ isn’t as hard to digest as some might think. It’s an open secret that Jonathan is an admirer of The Cure, which also led to a musical collaboration between Robert Smith and Korn during the 2007 `MTV Unplugged’ record. Well, listening to the thirteen songs on `Black Labyrinth’, The Cure was the first thought that came to my mind. Let me assure you, it is not a Cure tribute record, especially since Jonathan Davis voice is so unique and will always remind the listener to Korn but you can definitely hear that The Cure had an influence on writing these songs. `Black Labyrinth’ is not a Korn leftover album released as a solo album either. It is a musical retrospective of Jonathan Davis open mind and art. Korn fans can easily buy it without any problems for sure, so do all other open-minded music lovers.