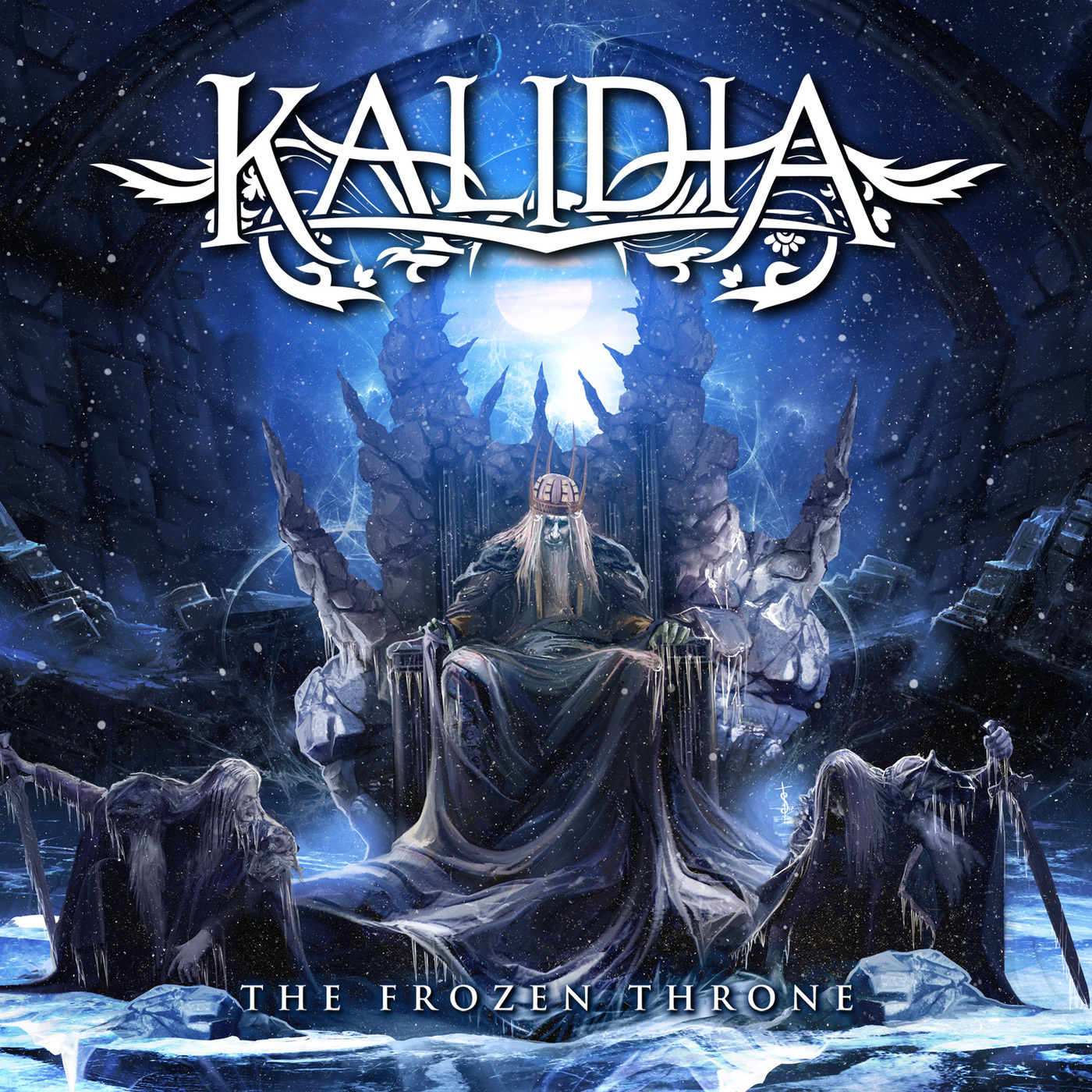 Italian Kalidia, founded in 2010, recently released their brand-new full-length album `The Frozen Throne’. After their 2012 EP `Lies Device’ I wasn’t particularly keen on reviewing this CD, but as I hit the play button, I was pleased to have done so. If one thing is proven during their 6-year hiatus; it must be the bands impressive growth. Kalidia has morphed from a below-mediocre band into an impressive and mature act with a few cards up their sleeve. Kalidia is the embodiment of “The Ugly Duckling” sage. Much like genre defining giants Nightwish, Within Temptation and likewise acts, Kalidia focuses on melody and epical crafted songs, coloured by the clean vocals of Nicoletta Rosellini. With galloping drums and swirling keys they shoot into gear on this epic symphonic new CD. Musical craftsmanship radiates from the high paced tracks and the band doesn’t discard the trademark ingredients. Roberto Donati [bass] and Dario Gozzi [drums] provide an impressive foundation for the band’s sonic melodic tunes. Frederico Paolini’s guitar playing is exquisite. Impressive and recognizable riffs alternate with bedazzling solos, and he shifts pace and tone frequently. Keyboards are swirling in between and add to the dense atmosphere of the epic symphonic tunes. Though it is unfair to discard the band as ‘yet another symphonic metal band’, as most of their tracks are packed with the genres defining ingredients. ,,Black Sails”, ,,To The Darkness” and ,,Queen Of The Forsaken” are benchmark songs, injected with multi layered and dense orchestration. On the other hand however, Kalidia morphs more frequently into another form. The band outlines the action packed sound with more traditional European metal ingredients, making them more interesting than average. Melody is still the key, but with drums in gallop the band draws from Teutonic German acts like Gamma Ray and Freedom Call, especially in the extremely catchy choruses. Most impressive however is the band’s stellar performance and their pompous pretentions radiating craftsmanship. It shoots forward with impressive guitar and keyboard interaction and towering choruses, on all 11 tracks. Kalidia’s songwriting is uplifting, as the band manages to frequently inject unexpected twists and turns, without lacking infectious hooks and melodies. Plus the charming Rosellini delivers a captivating performance in line with the band’s overall sound. Crystal clear pop alike melodies and an impressive low register are adding up to the sonic deliverance of the songs, like on the intimate piano ballad ,,Midnight’s Chant’’. And yes, her voice is typical for the genre, as are more of the band’s ingredients tinging ‘symphonic’, perhaps ‘gothic’. Another typical ingredient are the lyrics, set in a fantasy environment. Kalidia however also adds their own unique touch as they draw influences from Warcraft, like on the title track of the album. It adds to the song’s diversity in atmospheres and conceptual poise. The epic and atmospheric toning aligns perfectly with Rosellini’s vocals and the fantasy content of the lyrics. Just check out the magnificent ,,To the Darkness, I belong’’ with its intrinsic violin and symphonic elements, the Middle Eastern theme in ,,Circe’s Spell”, or the impressive dark and catchy ,,The Myth of Massada”.
Not picking favourites becomes hard because Kalidia delivers a rock solid and very enjoyable full-length debut, bearing all key ingredients needed to attract the listener. Musically they balance between symphonic goth and Euro metal, but don’t let this scare you off as Kalidia has a lot more to offer. Recorded and mixed by Freedom Call’s Lars Rettkowitz and mastered by Achim Köhler [Primal Fear, Amon Amarth, Brainstorm], the album advances with a crystal clear but pompous sound, adding up the band’s bombastic nature. Its action packed multi layered production is easy accessible and emphasizes the band’s excellent skills and their great songs. Kalidia is certainly a band to keep your eyes skinned for. `The Frozen Throne’ isn’t redefining the genres boundaries, but definitely delivers a varied portion of European melodic power metal with symphonic features. Recommended listen!