KARFAGEN-Echoes From Within Dragon Island 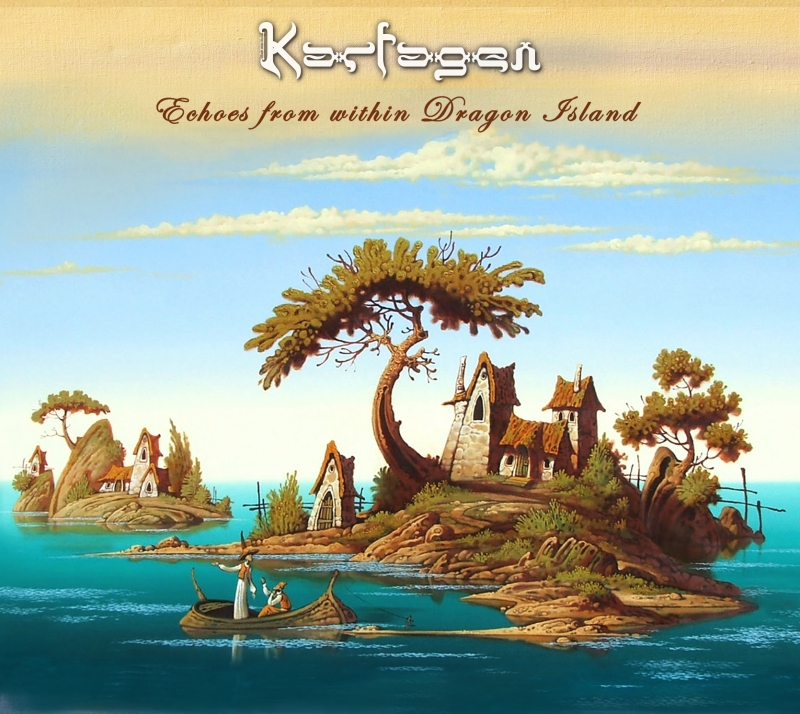 KARFAGEN-Echoes From Within Dragon Island

Some bands and projects remain miraculously undiscovered for the vast majority of fans on the globe. With the Internet widening the horizons of melodic and symphonic rock addicts, the world is growing more compact, luckily revealing some of these treasures. Though I am not always diving into the symphonic rock genre all too much anymore, we cannot and may not surpass Antony Kalugin’s epic releases crafted with his band/project Karfagen.

`Echoes From Within Dragon Island’ is already his 10th successive release and most of its predecessors must have surpassed the masses, as well as they went below my radar. With this album igniting the spark of my alt rocking symphonic engine gone to rust, I have explored his other albums online, for reference. Each and every one of them packed with impressively crafted progressive tracks, also displaying his growth as a songwriter and composer through the years, leading to this epic release. `Echoes From Within Dragon Island’ is a sonic exploration of wide varied musical influences, packed together in progressive driven songs mostly consisting of chapters subdued in sections of 6+ minutes. Typical alt prog rock running times, combined together to unravel a sonic ear book of enormous pretentions. This two-album [limited edition] release, with additional CD containing a deeper dive into the sonic matter at hand, however is something that grips upon first listen. Its sonic explorations are so varied and gorgeous, it deserves to be introduced to a wide audience.
Do not get scared off by all the above. I repeat: Do NOT get scared off by the above!
The long running chapters are all crafted with such melodic fine feeling; it is a sheer joy to run through them. Sonically you get sucked into Kalugin’s imaginary world and you will not get bored for one second, even if the overall pace is rather slow. There is so much going on, and the cinematic story unfolds with impressive atmospheric wonder. At times the uplifting and serene lingering melodies overwhelm you. Flutes, alt sax and piano hit your emotional nerve and the atmosphere nests in your soul and head. Keenly implemented vocal lines are adding to the grandeur, and enlighten the wondrous journey taken. Shifting shape frequently when guitars, bass and drum take over, you just don’t get bored any second. Just explore the ,,Dragon Island Suites 1-3” and you’ll catch my drift. Within all the colourful gradations and layers, the album keeps a sturdy rock pace. On the second chapter the serenity unfolds in a more progressive and jazz-rock driven poise, blooming with epic arrangements and colourful scenery. From ,,Shady Fairies” into ,,All The Names I Know” you get indulged with impressions and Dragon Island literally takes shape in your imagination more and more. It all leads to the impressively crafted and acoustically arranged ,,My Bed Is A Boat” that alters your imaginary dream state and unveils the depth of the Karfagen dream. The song bridges delightfully towards the serene Suite 3 and picks up displaying more of the elusive imaginary world of its creator. A whammy guitar with a sub note of classic David Gilmour perfection flows onwards. Tastefully delivered and interlaced with swirling keys, and even knob accordion and flutes are brought in to emphasize the impressive sonic landscapes pasted. The albums’ magnum opus is the impressive and towering ,,Valley Of The Kings” revealing the storybook dream of the concept. Chants and drum rolls take us into the powerful rock anthem in the best Yes tradition. Throbbing bass and polyrhythmic drums fuse into an impressive finale topping off this jaw dropping conceptual album.

CD2 of the limited edition consists of a couple of extra tracks, which all seamlessly could be added to the album, as well as some stand-alone tracks and extra’s. ,,Flowing Brooks” and ,,Winter Rooks” are exquisitely arranged and composed songs, much like both ,,Incarnation” tracks which are more stand alone, but in line with the Karfagen music on display. The instrumental version of ,,My Bed Is A Boat” doesn’t add much, as the original is more powerful, the single edit of ,,Dragon Island” is tasteful and pinpoints the power and finesses of the album in general. ,,Across The Dark We Steer” is a cinematic instrumental that could have been included somewhere in the first suite of the album or as the opening to the third suite. It is a short pointy track, ebbing with emotion and key-guitar interaction. This 2nd CD dies out with its most impressive track; the attractively gentle sounding ,,Alight Again”, recorded live in studio. The vocal interaction between Antony and Olha Rostovska is subtle and revokes Marillion Hogarth-era tendencies with duetting Strangers On A Train [Tracy Hitchings] perfection. When the keys start to swirl the song pumps loud with atmospheric Gilmour-like guitar lines and unloads with withheld anger. Astonishing….
For the conceptual theme of Kalugin’s new album he used the works of Robert Lewis Stevenson [`Treasure Island’, and the `The Ebb Tides’ likely used as inspiration for this album] as reference, to mould it all into this impressive album and taking us into a jaw dropping state of trance. It all blends together perfectly on this Karfagen release on which Kalugin accelerates musically and as a sonic visionaire with `Echoes From Within Dragon Island’ being an inspirational and cinematic masterpiece that tops many in this genre. It is powerful as it is serene; it is compelling as it is atmospheric.
Listen in, and be amazed!