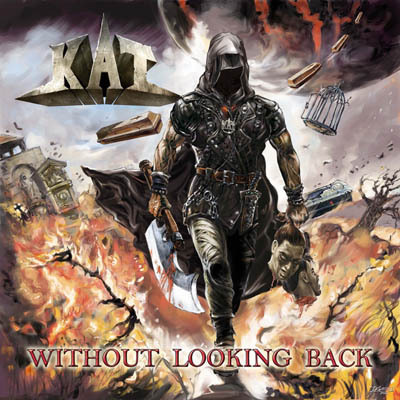 Polish formation KAT has been around since the early eighties and has during the years hopped onto several musical styles that were popular at the time. In 1986 they played black metal and their album ‘Metal And Hell’ was up there competing with a band like Venom. From the original line-up only guitarist Piotr Luczyk is left. KAT has regularly released material but always stayed in the second division of metal. Never ever were their efforts good enough to create a promotion to the top division and after hearing their latest effort ‘Without Looking Back’ it looks like they are staying were they have been for a long time. Today KAT tries to win fans with a form of melodic and aggressive metal that lacks first and foremost imagination. You listen to it, some parts are okay but nothing sticks with you. The ten tracks are for sure heavy, have some pace as well but singer Qbek Weigel is not a real ace in his trade and the tracks and sound are nothing more than mediocre. Luczyk produces some heavy riffs but as a whole it is not enough to compete with a band like Accept or Rage that they mention as the standard they like to be measured with. That is not the case on ‘Without Looking Back’. Okay to hear but it is an album that you won’t go back to that often. At least I won’t be.