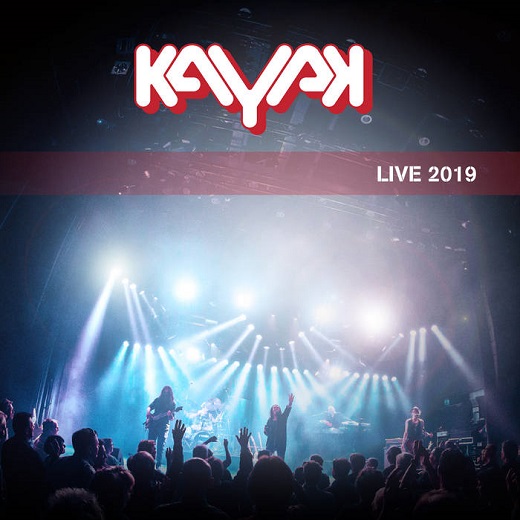 With their latest studio album ‘Seventeen’ (released early in 2018) Dutch progressive rock masters Kayak made a brand new start with a totally revamped line-up. Founder and keyboardist/producer and main song writer Ton Scherpenzeel recruited new talent around him, people that had already established themselves in the music scene like bass player Kristoffer Gildenlöw (former Pain Of Salvation), guitarist Marcel Singor (former Topaz), singer Bart Schwertmann and Dilemma drummer Collin Leijenaar. The results on ‘Seventeen’ were quite stunning indeed. The band toured to promote the album. Collin Leijenaar was soon replaced by Hans Eijkenaar (who has played in Kayak before) and the band managed to record a few shows in The Netherlands (in De Boerderij, Zoetermeer and Hedon, Zwolle) resulting in this 2-CD live effort. Still, this album and a winter tour of 2019 were postponed as Ton Scherpenzeel suffered some severe health problems which he managed to overcome after surgery and concentrating on rest and recovery. So here we have the live double album. Kayak has been around since 1972 in which seventeen studio albums were made and the band on this ‘Live 2019’ takes their audience through a jaw dropping journey that covers their whole history. It is obvious that the focus is on material from ‘Seventeen’ but older albums like ‘See See The Sun’ (their first one), ‘Kayak II’, ‘Phantom Of The Night’, ‘Night Vision’, ‘Merlin’, ‘Starlight Dancer’, ‘The Last Encore’, ‘Royal Bed Bouncer’ and ‘Letters From Utopia’ have been included as well. So it is a ode on their career and a celebration of old and new material. What impressed me the most on this 2-CD is not only the crystal clear sound where all instruments get their say and the impressive set list, but also the way singer Bart Schwertmann (who will release a solo-CD shortly) performs throughout the whole set list. His singing is just out of this world, even the mighty hit ,,Ruthless Queen’’ (originally sung by the superb Edward Reekers) sounds amazing with the interpretation by Schwertmann and I also especially like the vocal harmonies on this song. Another strong point is the sequence of the songs, it gives this release so much variation. Never ever does the band gets trapped into egocentric play, it all flows along naturally. Like for instance the way ,,Feathers And Tar’’ (a quite up-beat song) is being followed by the gorgeous instrumental ,,Irene’’ (with a key role for Marcel Singor). It is just one example of the way this 2-CD has been constructed and build up with heaviness being followed by or mixed with subtleness. As I stated before, the key focus is on the last studio album ‘Seventeen’ (seven songs are featured) and it is especially pleasing that Kayak has included the masterpieces ,,Cracks’’ and ,,La Peregrina’’ in the set. When you listen to this 2-CD you have the feeling that these musicians have been together for a few decades as it all flows so naturally and playfully but they have hardly been together for two years and then with such a result?! It says enough of all the talent that has been bundled together in this outfit. Definitely a must-have release for anyone who call themselves a fan of progressive and melodic rock and I am looking forward to their next studio-album.

You can order the album here: kayak.bandcamp.com