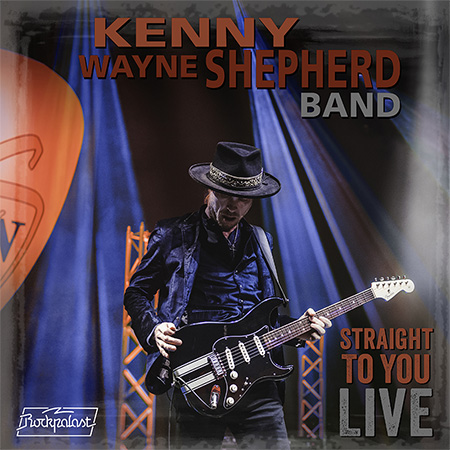 After the release of the last studio-CD ‘The Traveler’ guitarist/singer Kenny Wayne Shepherd managed to do a European tour a few months before Covid-19 struck and they recorded and filmed a gig the band did in November 2019 in the German city of Leverkusen. Accompanied by his long-time associate Noah Hunt (vocals/guitar), keyboardist Joe Krown, bass player Scott Pender, Mark Pender (trumpet), Joe Sublett (saxophone) and one of the coolest drummers ever Chris ‘Whipper’ Layton (Double Trouble, Stevie Ray Vaughn and Storyville) and armed with an immaculate set it is a pure joy to listen and watch this CD/DVD. I have never been a fan of trumpet or saxophone but the way Joe Sublett and Mark Pender manifest themselves on this registration works out better than I ever dared to expect. Their playing brings the music extra swing (not really keen on the solo spots the duo gets during ,,I Want You’’, but okay). Extra credits should also be given to the flowing drums and bass patterns and lines as Layton and Scott Pender (who shoots his parts straight from the hip with his bass guitar almost hanging on his ankles) really give the music the push it needs. Layton is such a cool and collected type of musician with a certain set of skills that you hardly encounter these days. Shepherd and Hunt are for sure the guys it is all about. Noah Hunt is for me the coolest and one of the best blues rock singers in the genre. Always relaxed and totally mesmerizing the public with that deep and dark voice while Shepherd establishes himself as a real guitar hero with this riffs and tasty solos. But it is also the way the set has been built up that really impresses. Variation galore. Starting off with the rocker ,,Woman Like You’’ to extended versions of songs like ,,Turn To Stone’’ and the superb track ,,Heat Of The Sun’’ plus a blistering version of the Jimi Hendrix classic ,,Voodoo Child (Slight Return)’’ I guess we see a band in pure top form. Accompanied by an immaculate sound and filming it does not even matter that much that the musicians are a bit static on stage. They let the music do the talking for them in such a manner that if you are a fan of Kenny Wayne and his musical crew ‘Straight To You Live’ is a must see, must hear and must have release! And I am making nothing more than an understatement here! Top notch!