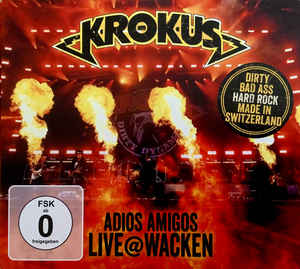 Already in 2019 Swiss metal and rock mothership Krokus announced a final tour that also would take them to the prestigious Wacken festival in Germany. An ideal way in front of a large audience to record and film their swansong tour. Later in 2021 the band hopes to finally continue that farewell tour as for the obvious reasons Krokus was not able to perform. There can be no doubt about the role that Krokus has played in more than four decades of Swiss rock and metal. Krokus paved the way for acts like Shakra and Gotthard. The band has been important and was successful in Europe and the USA although there was harsh critic for the fact that after their best album in my opinion ‘Metal Rendez-Vous’ Krokus started to sound more and more like AC/DC and was covering songs like ,,Ballroom Blitz’’ (The Sweet), taking the direction of the band to glam rock.

Still, although there were numerous changes in the line-up throughout the years and several management problems under the guidance of guitarist Fernando Von Arb the group managed to keep their heads above water, releasing albums on a regular bases, touring and staying alive. Not that the successful days from the eighties were ever copied again but the band did alright. So here were are looking at and listening to ‘Adios Amigos Live @ Wacken’ in front of thousands of rockers and metal heads and Von Arb, band founder Chris Von Rohr (bass), singer Marc Storace, guitarist Mandy Meyer, drummer Flavio Mezzodi and guitarist Mark Kohler are letting it rip one more time. It is a solid performance as the band works through a set that has not many surprises. Party rockers like ,,Long Stick Goes Boom’’, ,,Hellraiser’’, Neil Young’s ,,Rocking In The Free World’’, The Guess Who’s ,,American Woman’’ plus the Manfred Mann classic ,,Quinn The Eskimo’’ go hand in hand with some of the best songs the band ever recorded like the triple guitar attack cracker ,,Fire’’ and ,,Bedside Radio’’ (both from ‘Metal Rendez-Vous’), ,,Eat The Rich’’ and ,,Headhunter’’. Nice to see them one more time at what they do best and that is performing live, getting the audience involved and spreading the message of rock n’ roll. Depending how the world recovers in the next months from the pandemic it is well possible that Krokus takes to the stage once more but if not this is not a bad way to say adios amigos.