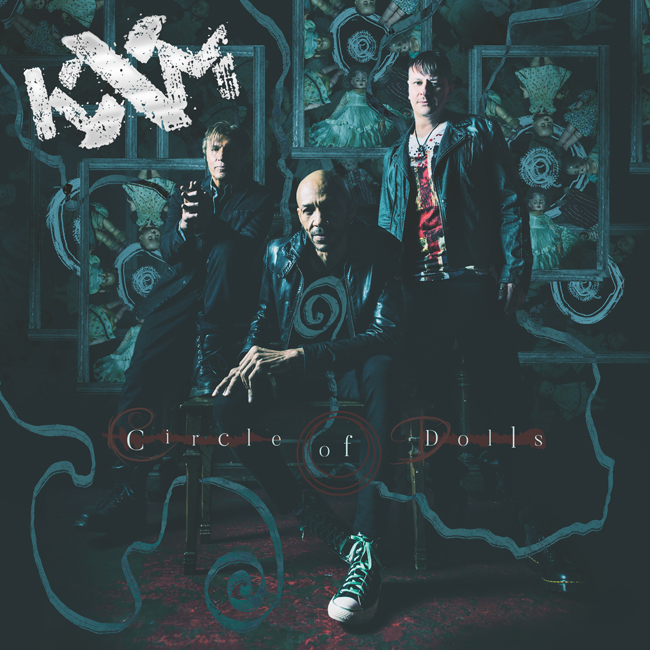 Let’s start this review off with the little tongue-in-cheek George Lynch signed up in the bio: “It’s better than the first two. It’s insane. The magic’s there, the chemistry’s there, and we’re just sitting here patting ourselves on the back, telling each other what geniuses we are!”

Obviously Lynch is known to have a mind of his own and certainly speaks out, but I also sense the pun intended in these words. It adds feeling to the joy the band has found creating music together on their 3 releases. With Mr. Voodoo on guitars and the insane talents of vocalist / bassist dUg Pinnick (King’s X) and drum wizard Ray Luzier (KoRn, 9.0), KXM certainly has a no holds barred musical interaction that leads to impressive moments.

`Circle Of Dolls’ is their first album for Frontiers Records and follows the 2017 `Scatterbrain’ release. Since all members kept productive with their own bands, but the KXM spark kept alive. The fertility of the shared love for music brought them together again and ,,War of Words” comes barging in with perfectly timed strength and great strive. Fusing their unique trademark sounds into the KXM blend is intrinsic. Pinnick’s typical voice holds up well within the turmoil pasted by Luzier’s progressive powerhouse drumming and Lynch’ heavy riffs. Midway the song the music halts to explode into an action packed jam-like instrumental section with Lynch going mental over Luzier’s freakish drum patterns. The low-end bass from dUg almost vaporizes in this violent cocktail. The fluent interaction is insanely driven and hails from the band’s set way of creating. Go into a studio and jam without preconceived notion. The outcome is recorded at a one song per day ratio, with a finalization process of fine-tuning for lyrics, choruses and lead breaks.

It this utilization of shared passion that drives the album. Just check the intense opening of ,,Mind Swamp” with its angular guitars, which also are taken onwards onto the multi layered opening of the title track. Added insane stop ‘n go drumming and captivating percussion work adding multiple layers, and with dUg wailing and soaring his lyrics the track evolves with every spin. Lynch adds spooky riffs and a short drawing solo contrasting deeply with the overall density. This distinct edge and musical perfection is kept alive throughout the album and the bodywork of the songs has so much going on, musicians will drool. The oozing comfort of Pinnick’s vocals and the band’s choirs contrast significantly with the gripping music. ,,Lightning” fuses King’s X ingredients and vocal interaction with proggie (almost jazzy) musical interaction. George makes his guitar wail like dUg’s voice and stretches his notes endlessly. Shifting to another timestamp for ,,Time Flies” the band goes almost Beach Boys, without losing the hard rocking attitude.

Vibrantly blooming with intense upbeat it flies by and runs fluently into the sweep picking opening to ,,Twice”, the slow mover with intense guitars and vocal interaction in the X (`Faith, Hope Love’) vein. Drum shuffles and time changes take us into the groove heavy handclap motioned ,,Big as the Sun”. The song has interesting time changes with unpredictable structure adding extra intensity. Going all experimental again on ,,Vessel of Destruction”, fusing a heavy floating riff with urging drum and double kicks, the song rolls forward with withheld tribal panache. This depth in drumming is maintained on the following ,,A Day without You”. Tiptoeing into a steep riffs and ditto time signature, the song is one of my personal favourites.

,,Wide Awake” benefits from the elemental way of jam-recording as it is frail but doesn’t lose its appeal. Tremendous drive is laid upon us with ,,Shadow Lover” and its riff and drum driven cocktail. Luzier again giving his best and Pinnick’s withering vocals give it a spooky doom. Going all ominous on ,,Cold Sweats” opening, KXM switches pace frequently and mixes jazzy time signatures with towering 70s rock and prog to unload with metal heavy choruses full of anguish. Ending the album with ,,The Border” makes the album go out in style and leaves listeners flabbergasted.

KXM is the perfect sum of talents. Not overcompensating their skills by producing the album overly, they rely on their basic skills and drive recording without pre-set outline. `Circle Of Dolls’ is more ominous and darker than its predecessors adding a distinguished edge to their sound. Drawing from a wide varies pallet of styles the band also maintains its signature sound set on both predecessors. KXM is a band to keep listening to and manages to force itself onto you for willing acceptance.