LABYRINTH-Welcome To The Absurd Circus 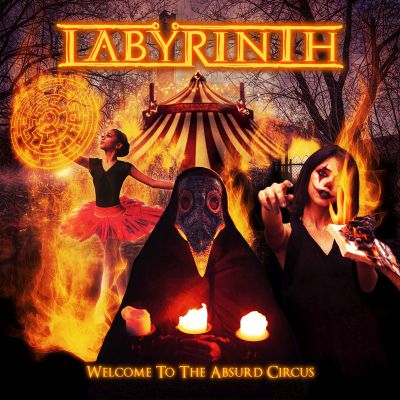 LABYRINTH-Welcome To The Absurd Circus

With their 2017 comeback album ‘Architecture Of A God’ (after an hiatus of some seven years) Italian progressive/power metal rockers Labyrinth made a quite triumphant return indeed but after that nothing much happened. Guitarist Olaf Thorsen made an album with singer Mark Boals (who was supposed to join Labyrinth at some stage) under the moniker Shining Black in 2020 and around the release of that CD news came to the surface that Labyrinth also had plans for a new chapter in their long history. In the meantime drummer John Macaluso had been replaced by Mattia Peruzzi but the core of the band (Thorsen, singer Roberto Tiranti, co-founder/guitarist Andrea Cantarelli, keyboardist Oleg Smirnoff and bass player Nik Mazzucconi) stayed intact and in the first month of the new year these seasoned veterans add another album to their catalogue that started in 1996 with ‘No Limits’.

On ‘Welcome To The Absurd Circus’ Labyrinth reaches new heights. Especially Roberto Tiranti is the man who steals the show with his big reach, his unique feel for melody and the way he manages to move between all the mood swings that characterize the eleven songs on this record. Mostly surrounded by a metal edge provided by the solid riffs from Thorsen and Cantarelli these songs have (piece by piece) an enormous variety and at stages also stunning arrangements. But never ever Labyrinth gives you the impression that they get lost in their own ‘labyrinth’. Yes, the songs are at times complicated and can jump all over the place but because of the super clear production and sound it is all pretty easy to follow. It is amazing how a song like ,,Live Today’’ or ,,Words Minefield’’ just manage to impress with their variety, yet they are at stages heavy as fuck. This is progressive power metal as it should be if you ask me. Even the Ultravox cover ,,Dancing With Tears In My Eyes’’ sounds quite stunning in the Labyrinth version. But the best track for me is the gorgeous ballad ,,A Reason To Survive’’ where Tiranti gives a stunning singing lesson being in control all the way, sounding ultra-sensitive. You would expect the song to fully burst out at some stage but that does not happen. It is a very soft one but a very good one. The album ends with a hard note in the form of  ,,Finally Free’’ were again the metal guitars and the tempo of the track enforce the power that Labyrinth can develop at any given moment. But also some parts of this song are extremely melodic. This is an album that is quite impressive in more ways than one. It is a fine combination of strong musicianship, excellent vocals and variety galore. You might need a few spins to grasp it all but once the penny drops….