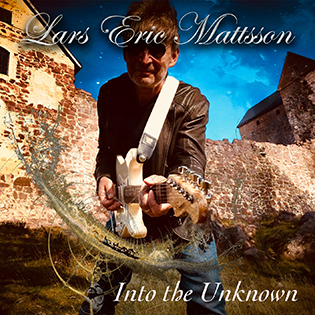 Finnish guitarist Lars Eric Mattsson has been around for a cool 30 years or so releasing albums under his own name or with bands and projects like Condition Red, Vision and Book Of Reflections, covering everything from neo-classical rock, instrumental rock, progressive material and blues. Lars Eric is a jack of all trades. ‘Into The Unknown’ came about after the veteran took a break from music returning to the studio with new ideas, hungry and new found inspiration. This CD has no less than 15 songs of which five are more interludes than songs, short and to the point. The music is the most melodic material Matsson has ever recorded with influences from neo classical metal to blues and slightly progressive elements as well, and most important with plenty of guitar work. Mattsson also played bass and keyboards and only needed a drummer (Christer Jansson) to help him out while also keyboardist Alexander King contributed to the record that is really full of variation. ,,Give It All’’ has that neo-classical guitar intro, ,,Soul Mate’’ is a very sensitive ballad while ,,Burning Hot’’ is a bluesy based heavy rocker and ,,57 Chevy’’ a very nice instrumental interlude. For a few years now Mattsson is singing himself. You can hear that he not a singer by trade. Not that he makes a shamble of things but some vocal parts just sound forced and slightly unnatural. It puts a small damper on an album that for the rest is easy on the ear and has really immaculate guitar acrobatics on offer. When you look at the career of this man and the various styles he has displayed over the years it seems to me that ‘Into The Unknown’ is an inspired sounding summary of all those years in the business.