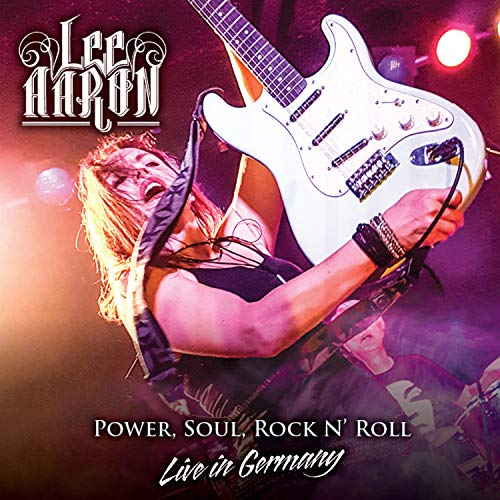 After a little jazzy musical detour, Canadian Metal Queen Lee Aaron returned to the rock scene with the release of `Fire And Gasoline’ in 2016. Two years later Mrs. Aaron let us know it wasn’t a one time only experience and released a strong follow up, the heavy rock and blues rocker `Diamond Baby Blues’. Instead of releasing yet another studio album, Lee Aaron now puts out her first official live album called `Power, Soul, Rock N’ Roll (Live In Germany)’, which was recorded during the German tour in 2017, at the concerts in Balingen and Nuremberg. Lee sings her heart out (sometimes also plays guitar) and does a rocking job together with her great playing band: Sean Kelly [guitar], Dave Reimer [bass], John Cody [drums] and a tour keyboardist. Lee debuted in 1982 with `The Lee Aaron Project’, went sky high with her second album `Metal Queen’ in 1984 and since then she has been an active musician who released 13 studio albums so far. With this brand new live album she confirms her high musical qualities, being a devoted artist walking her own path. Lee Aaron opens with an impressive version of Deep Purple’s classic track ,,Mistreated’’, really what a powerhouse this lady is. She also nails it with the well-known cover ,,I’m A Woman’’ [Bo Diddley], showing her more bluesy side. Both tracks, together with the fierce sounding ,,Diamond Baby’’, do feature on the earlier mentioned latest studio album `Diamond Baby Blues’. `Power, Soul, Rock N’ Roll (Live In Germany)’ is an honest sounding, overview of Lee’s long career, presenting the golden oldies ,,Rock Candy’’, Metal Queen’’, ,,Watcha Do To My Body’’, ,,Hot To Be Rocked’’, ,,Powerline’’ ,,Some Girls Do’’, ,,Sex With Love’’ and the strong emotional power ballad ,,Barely Holdin On’’, all very well and energetic performed. Having the “new songs” ,,Tomboy’’ and ,,Fire And Gasoline’’ in the set list as well, it makes the circle of her career complete.

`Power, Soul, Rock N’ Roll (Live In Germany)’ definitely gives us all a strong reminder of how talented and persistent Lee Aaron is and as a true power woman she simply proves how relevant her contribution to the music community after all these years still is. Not to mention how fresh and amazingly good-looking she still is. This digi pack also comes a DVD which contains not only all the live songs in a good quality (how awesome!), but also the videos for ,,American High’’, ,,Diamond Baby’’ and ,,I’m A Woman’’ and a photo gallery. Go grab your copy!
—
HBLS review `Fire And Gasoline’ here
HBLS review `Diamond Baby Blues’ here
HBLS Beauty & Lifestyle interview with Lee Aaron here