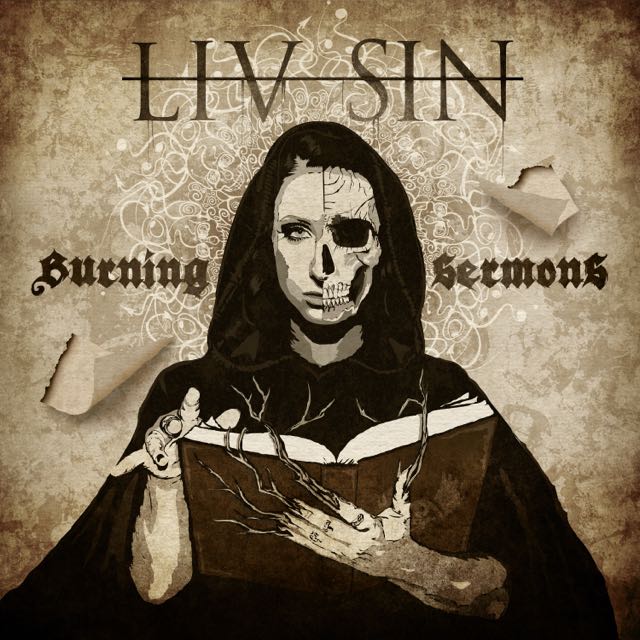 After the demise of Sister Sin, Liv Jagrell eagerly picked up the gauntlet. Born was Liv Sin, the band led by Jagrell picked up where Sister Sin left off and packed evolutional momentum. Not straying from the metallic roots, Liv and her companions mapped out a new course in their career and `Burning Sermon’ is the latest fruit of their labour.

,,Blood Moon Fever” opens with ominous synth sounds to dive steep into a riff driven metal direction. Enhanced with modern sound bytes the song picks up momentum, especially during the chorus when guitars are riffing in close harmony. Frequently Jagrell reminds me of Phantom Blue’s Gigi Hangach with her growling vocals. Overall however it is typical powerhouse Jagrell’s singing dictating the new album, as expected. The song however tings more classic rock than ever and it widens the musical pallet of the band that is seriously evolving. Intense turmoil is casted upon us in the opening of ,,Chapter Of The Witch” which progresses with vocal – drum interaction and riffs delivered with tormenting pace. Keyboards add an ambient comfort. Typical for Liv Sin are the roaring vocals and tremendous drive fused with excellent nesting melodies. The track also deepens the sonic outlets of the band again and is tremendously intense. The tracks on the album all progress according to the traditional metal template and thus pack insane musical section with spine chilling guitar solos. More ominous paced is the following illustrious ,,Hope Begins To Fade” with its marching beat and tension-packing sub note, which opens with a cinematic symphonic intro. Liv roars and howls wildly with chanting elements added ramping up to tower with impressive musical interaction. Matching the ominous pace of the song the crash cymbal is scattering and the solo is whammy and somewhat psychedelic tinted. It appears to be the opening towards the drum rolled and action packed ,,War Antidote” which packs intense momentum. Storming forward with great wallop the song forces Jagrell to draw from her most impressive register. She definitely is the face and defining sound of the band, but in the meanwhile the quintet harnesses a unique overall sound with classic metal and classic rock elements in place. ,,At The Gates Of The Abyss” and ,,Slave To The Machine” enrol with Maiden-esque propulsion. The double kicked drums add their own uniqueness for the Liv Sin sound. Vocal interaction is added and the guitars again swirl with orbiting magnitude. Exquisite riffs and fierce short melodies are fires into place before diving into another awesome solo. And all match the songs intentional course. Discomfort is spread in the opening ,,The Sinner” howled into action by Jagrell to spit its dirt in only 2:58 to find more discomfort in the opening ,,Death Gives Life A Meaning”, seeing King Diamond’s haunting stokes being inflicted in the Liv Sin universe. Liv grunts over a compelling loud riff before the song flowers with bridge and chorus. The keys are again tastefully delivered to empower the chorus. ,,Ghost In The Dark” is an acoustic tune with lamenting mist. The song unloads intense power and melody with emotional vocals. Jagrell roars and truly steps up to wail with towering power. An impressive side of the metal mistress keenly outlines by the musical framework of the song. Dominant keys push the envelope. ,,Dead Wind Intermezzo” closes the album with galloping drums and scattering cymbals over hard pushing riffs. Running 5+ minutes the song is the longest on this 10-track release, but again packs tremendous power and fierce lustre. Dying out in haunting pace the song scatters with passion and the short-lived solo is ravishing and adding to the scorching emotions of the track.

Liv Sin has tremendously progressed. `Burning Sermons’ is the first album of Liv that managed to lure me in. All tracks are metal tunes packing intense momentum and awesome musicianship. The songs have the metallic boost, but don’t lack melodic appeal and even inject the riff-heavy songs with classic attitude and panache. Keenly implemented keyboards are adding to the towering melodies and modern sounds do the tracks justice. It is all perfectly balanced and crafted by metal enthusiasts. With Liv Jagrell being the face of Liv Sin I think we are selling short the band. Must listen!