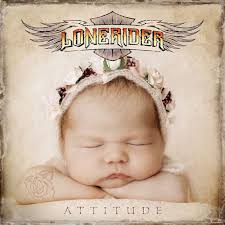 Escape Music owner Khalil Turk likes to match up musicians in new projects and most of the time his projects work out. He likes to use people like Tommy Denander, Mike Slamer and Brian J Anthony to guide things along and quite often FM singer Steve Overland gets involved as well. For the Lonerider project Steve Overland teamed up with veteran drum master Simon Kirke (Free/Bad Company), Thunder bassist Chris Childs and Heartland guitarist Steve Morris who has worked on quite a lot of Escape adventures as well. I also remember Steve Morris being in the Ian Gillan touring band when the Deep Purple singer did his own stuff. For me Morris is one of the most under rated musicians ever. If you follow his track record you will come to the conclusion that this man has always delivered quality rock music throughout his career. Morris is not a guy that likes to manifest himself, he is more the silent force staying in the background, making sure that everything turns into gold as far as the music is concerned. The same goes for Lonerider. The twelve songs sound from the first until the last note familiar and very accessible. With the experience that all involved musicians bring to the table it shall not surprise you that ‘Attitude’ is a more than solid melodic rock record. The songs rock along nicely, have plenty of variation, sublime riffs and solos and quality vocals while Childs and Kirke make the impression they have been a tandem for the last two decades or so. Okay, I will admit that you can hear the influences of the bands that these guys play in are all over Lonerider, but hey, a combination between Thunder, Bad Company/Free, Heartland and FM is the one that you can wake me up for any minute of the day. With songs like ,,Gimme Me Your Love’’, ,,Angels Without Wings’’, ,,Heart And Soul’’, ,,Fast Train’’ and ,,Wanted Man’’ Lonerider might not reinvent the wheel here but the result is without a doubt one that a melodic rocker will sign for every day of the week.