LONG DISTANCE CALLING-How Do We Want To Live? 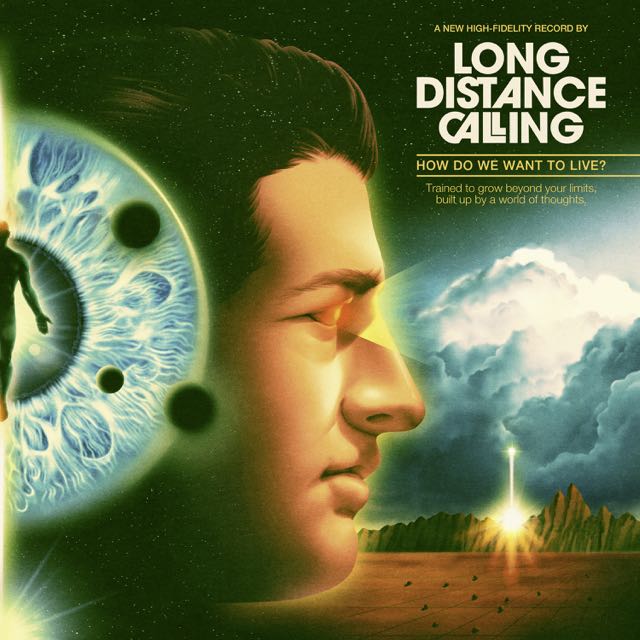 LONG DISTANCE CALLING-How Do We Want To Live?

“What happens when Artificial Intelligence becomes smarter than humans?”, “Do we have to commit to every technical innovation, simply because it is available now?” or “Have we already ended up in a dystopian society with the current pandemic and the global lockdowns that have come along with it?” These are some of the many themes that the German Progressive Post-Rock band Long Distance Calling explores on their seventh studio release `How Do We Want To Live?’

As with the previous albums, most of the music on `How Do We Want To Live?’ is predominantly instrumental so the aforementioned themes are being exemplified with the aid of a monologue narration during or between songs. The album opener ,,Curiosity (Part 1)” begins with the spoken words “Curiosity is a real bastard…” and this monologue immediately sets the mood for the beautifully executed ,,Curiosity (Part 2)”.
All the narrative monologues are subtly used throughout the songs and never distract from the actual music. They fit the music perfectly and enhance the underlying themes. A prime example of such monologue is a quote of Stuart Armstrong from his book; “Smarter Than Us: The Rise of Machine Intelligence” in the middle of the beautifully arranged song -and also the lead-off video for this album- ,,Hazard”. This spoken monologue is a great bridge to build up the tension for the beautiful guitar solo that follows. Certainly, one of my personal favourites from this album!
The thought-provoking ,,Voices’’ (go watch the video for this song on YouTube!) underlines the versatile nature of this album and reminded me, upon its first listen, more to an Alan Parsons Project instrumental instead of a Long Distance Calling song. Well, it definitely showcases Long Distance Calling’s urge to innovate their sound and for which I applaud them for! This new album also revisits one of the traditions that dominated the first four Long Distance Calling albums and that is the inclusion of one song that has a guest vocalist. After collaborating previously with guest vocalists such as Peter Dolving (The Haunted), John Bush (Armored Saint, ex-Anthrax), Jonas Renkse (Katatonia), singer/songwriter Petter Carlsen and Vincent Cavanagh (Anathema), it’s now the relatively unknown Eric A. Pulverich from the German Alternative Indie band Kyles Tolone who had the honourable task to lay down his vocals to the song ,,Beyond Your Limits”. His voice fits perfectly with the music that Long Distance Calling had penned down for him. The album ends with two songs that paint a rather bleak vision of the human race as a whole. The industrial song ,,True/Negative” serves more or less as an intro to the somber but nonetheless beautiful executed ,,Ashes” wherein the human race is being compared with a virus or cancer that needs to be eradicated by Artificial Intelligent-empowered humans.

Long Distance Calling has managed again to release an album that captivates its listener with their predominantly instrumental adventures and simultaneously offers its listener some food-for-thought about the state of digital progress, in which basic values like ethics, individual freedom, and general humanism get more diffuse and abstract. I’ve recently learned that the 6th season of Black Mirror has already been “released” and that it is the current (somewhat, dystopian) reality in which we all now go through. Well, at least Long Distance Calling provides the ultimate soundtrack for these trying and uncertain times with the release of the album `How Do We Want To Live?’ and I highly recommend it!