LOUISIANA’S LE ROUX-One Of Those Days 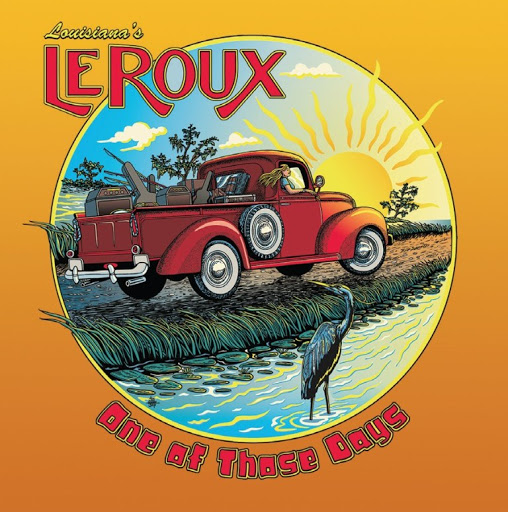 LOUISIANA’S LE ROUX-One Of Those Days

Originally from the town of Baton Rouge Lousiana’s Le Roux released their first album in 1978 and became a secret favourite among fans of AOR with albums like ‘Up’ (by some seen as their finest) and especially ‘So Fired Up’ when a certain singer called Dennis ‘Fergie’ Frederiksen entered the Le Roux scene. The band had changed their style towards melodic rock/AOR in comparison with their debut album. Fergie Frederiksen lifted the band to an ever higher level on songs like ,,Carrie’’ and ,,Line On Love’’ (a duet with guitarist Tony Haselden). Although ,,Carrie’’ was a modest hit in The States the band lost their major deal and called it a day with Frederiksen (who sadly passed away a few years ago) moving on to Toto singing on their ‘Isolation’ record. A bit later the remaining members of Le Roux started playing live again on a local scale, released some sort of greatest hits album and later on some new material as well. Through the years guitarist Jim Odom, Tony Haselden and keyboardist Rod Roddy kept the flame alive with the current line-up with singer Jeff McCarty, drummer Randy Carpenter, percussionist Mark Duthu, keyboardist Nelson Blachard and bass player Joey Decker. These musicians are now also presents on the brand new record ‘One Of Those Days’ that also has contributions from original bass player Leon Medica, who retired from live performances but stayed in contact with his old friends in the meantime building up a reputation as a session musician and producer. Talking about the producer of this album, that is veteran Jeff Glixman who especially in the seventies and eighties was the man working with names like Magnum, Kansas, Gary Moore, Yngwie Malmsteen, Black Sabbath, Saxon, John Norum and many other rock acts. Good to see that he is still around doing the right thing for rock music. What does ‘One Of Those Days’ have in store? Well, in some ways the band has gone back to the beginning as the music does have southern rock/Dixie influences, some AOR, heavy rock and at stages some soul as well. It is a bit of a mixed bag if you ask me but at least it is one that is very tasty. The band revisited their own past by re-recording ,,New Orleans Ladies’’ from their very first album (with a guest role for guitarist Tab Benoit) and they even tackled ,,Lifeline’’ (from ‘So Fired Up’) again, but the band decided to change the last song into an extended version with quite a southern swing to things. In fact because of the parts that percussionist Mark Duthu contributes the band sounds at stages in the vein of Santana meeting The Allman Brothers (especially the title track of this album). And the way Le Roux has approached the song ,,After All’’ is a joy to hear. A very nice ballad with vocals that will remind you of the one and only Malford Milligan of Storyville. So much soul and beauty combined together in this sensitive track that managed to send shivers down my spine. Like I said ‘One Of Those Days’ is a mixed bag where this group more or less gives us a musical rundown of their whole career. Not strictly AOR, not strictly southern rock, not strictly soul or blues, not strictly heavy rock or West coast rock, it is a combination of all their albums packed into one. A nice return for these veterans after such a long time being absent from releasing new material!