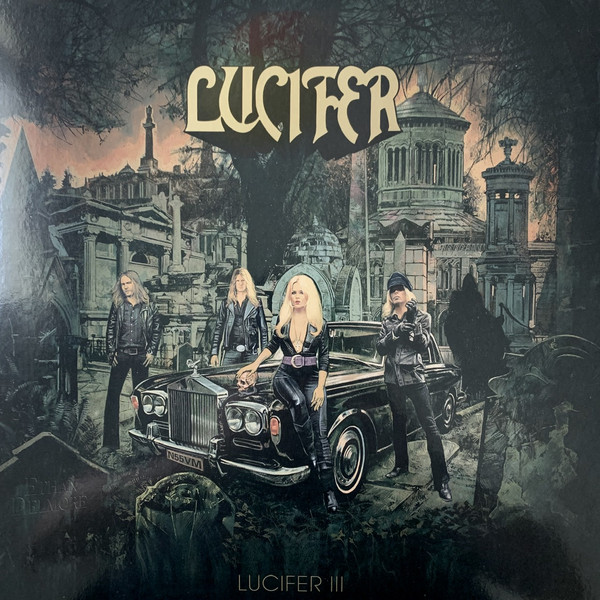 The second Lucifer album (‘II’) marked the beginning of a new writing and recording team. Singer Johanna Sadonis found in the experienced Nicke Andersson (The Hellacopters/Entombed) a writing and recording partner and even moved from Berlin to Stockholm. Nowadays they are married, so things have worked out in more ways than one. The duo composed nine new tracks (total playtime close to 40 minutes) and recorded them with the guitarists Martin Nordin and Linus Bjorklund plus bass player Harald Gothblad. ‘III’ has a more cohesive sound. The musical course has not really changed that much. Lucifer is a band that with the specific voice of Johanna is a very seventies kind of rock band, sounding retro, taking their influences from that era and adding a light psychedelic sauce to the sound. The singing of Johanna has something about it. Just like Avatarium’s Jennie-Ann Smith she is prominent and important for the music as are the in seventies effecst drowned guitar riffs and solos produced by Bjorlund and Nordin. Johanna Platow Andersson and drummer/producer Nicke Platow Andersson are in several ways a match made in heaven as Lucifer sounds very inspired on songs like ,,Lucifer’’ (where Johanna adds an extra touch with her emotional voice), ,,Pacific Blues’’, ,,Ghosts’’ and ,,Leather Demon’’. It might not be music for you if you like to hear a more modern rock sound but admirers of seventies retro-rock style will love the third effort of Lucifer!