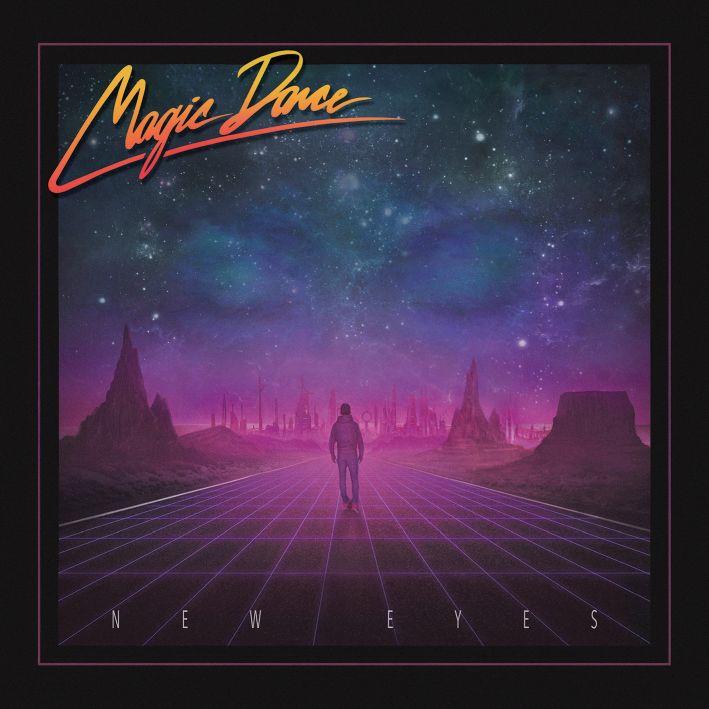 Magic Dance caught the interest of AOR and rock fans when the band around singer/composer Jon Siejka released the album ‘Vanishings’ in 2016. Before that CD Siejka was mainly active in the techno/dance scene before switching to a more rock orientated approach. This magazine picked up the record as well on Bandcamp and was pleasantly surprised by its quality. Also in the Frontiers offices in Italy alarm bells went off and soon Jon Siejka saw himself picked up by the label. At this moment Jon Siejka has transformed Magic Dance into a band but while working on ‘New Eyes’ he almost did everything by himself (vocals, guitars, keyboards, song writing and production) with the involvement of a few musicians like drummer Kevin McAdams, bassist Kevin Krug and the guitarists Tim Mackey and Jack Simchak. All these guys are now part of the group. On ‘New Eyes’ Siejka continues the musical line he had created on ‘Vanishings’. Magic Dance is a pure AOR band but the approach and the sound has a high tech flavour. This band does not sound as straight forward as the bulk of the AOR groups and to be honest ‘New Eyes’ has a heavier character as well. Very melodic, a bigger part for the guitar and a vocalist that has his own ‘sound’ colour, which makes him recognisable. ‘New Eyes’ is a smooth CD with some cool songs but also a few that are just ‘so so’. A bit more consistency in the song writing would have helped this record as for instance opener ,,You’re Holding Back’’ has a chorus that keeps coming back over and over again. Maybe as an opener not the best move to make. Personally I think that ,,Never Go Back’’ with its energy would have fitted better on that spot. But in general it must be said that Magic Dance puts a different flavour and ingredients in their sound which makes the group stand out. And if Siejka on the next album can deliver a bit more variation in his vocals (after a while you get the impression that he lacks a bit of variety in his performance) and more consistency in the song writing Magic Dance could become a real force in the genre. They are on their way but the progress made on ‘New Eyes’ is not as big as I had expected. Still a CD that an AOR fan should be happy with.