MAGNUM-Lost On The Road To Eternity 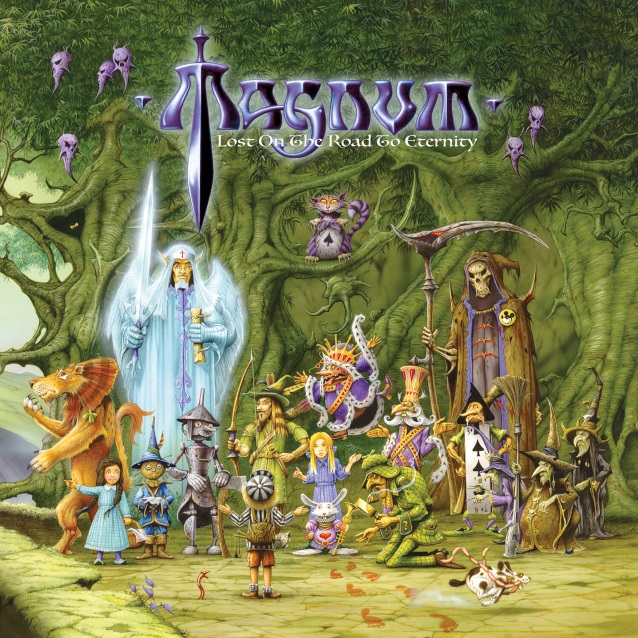 MAGNUM-Lost On The Road To Eternity

Some changes have been made in the line-up of English rockers Magnum. Mark Stanway (keyboards) who has been with the group for many years has been replaced by Rick Benton while drummer Harry James found it too difficult combining his work schedule for his other bands Thunder and Snakecharmer with that of Magnum. His position has been taken over by Lee Morris. But as the direction of Magnum has always been determined by guitarist/song writer Tony Clarkin and singer Bob Catley the departure of Stanway and James has not altered the style and sound of Magnum. With their early 2016 CD ‘Sacred Blood Divine Lies’ Magnum (in my opinion) did not reach the high level of several of their albums they produced in the eighties. The album was good, but a bit played on safe and it lacked an absolute top song. The album though consolidated the position of this band without any problem and ‘Lost On The Road To Eternity’ will do the same and maybe perhaps a bit more. With the new recruits on board it seems to have given Clarkin some new inspiration as I must admit that the level and quality of the song writing is very consistent and strong. As always Magnum offers a nice combination of heavy rock songs with tempo and balls and more epic ballad type of rockers that are sometimes a bit haunting. In that aspect ‘Lost On The Road To Eternity’ does not disappoint even for one second and yes, for quite a while Magnum does approach the quality that distinguished albums like ‘Vigilante’, ‘Wings Of Heaven’ and ‘On A Storyteller’s Night’. Listen for instance to the epic title track where Avantasia’s Tobias Sammet joins vocal forces with Bob Catley to perform a sparkling duet, or the powerful album openers ,,Peaches And Cream’’ and ,,Show Me Your Hands’’ where Clarkin and Benton perform a nice interplay between keys and guitar. Magnum at their very best. I might be mistaken but on this album it seems that Tony Clarkin and the rest of the band have found their musical mojo again as the group sounds very inspired convincing in the vocal department, adventurous and dedicated. Magnum has given us a richly coloured 20th studio album. It seems that the CD-package contains a second CD with a handful of live tracks recorded during a show in Spain. As usual the band will follow this release up with an extensive tour throughout the UK and Europe. Check the Magnum website for dates and further info and if you are into vintage and stylish melodic heavy rock with symphonic influences, this might be an excellent start in 2018 for you.