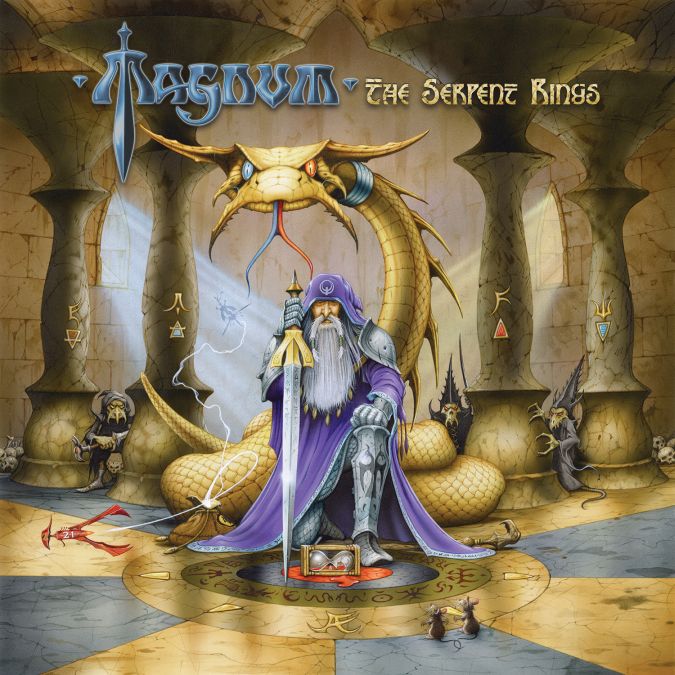 There seems to be no end in sight for the creative talent of Magnum guitarist/composer/producer Tony Clarkin. The man at the age of 73 now does not let up and has composed another eleven new songs with singer and partner Bob Catley by his side. The last studio album ‘Lost On The Road To Eternity’ (2017) was already outstanding. New drummer Lee Morris and new keyboardist Rick Benton gave Magnum some extra inspiration and especially the colourful parts of Benton added energy and extra melody to the already majestic Magnum sound. That album was followed by the (also) stunning live registration ‘Live At The Symphony Hall’ where especially Bob Catley shined. That live-CD was the last with long time bass player Al Barrow who moved with his family to the USA in 2016. The logistics and the wish of Al to spend time with his family and concentrate on his own stuff led to his departure. His replacement making his debut on ‘The Serpent Rings’ is none other than Dennis Ward, who came to the dramatic decision to leave the German rockers of Pink Cream 69 after being with them for about 30 years. Ward is as we know also an excellent singer (think about the last Gus G album ‘Fearless’ or the Khymera project) and a popular producer, so Dennis joining Magnum is quite surprising. Not sure if he will put his career as producer on a lower level now as Magnum is going to tour quite extensively in 2020 and the producer’s job with Magnum is normally for Tony Clarkin himself. This does not alter the fact that ‘The Serpent Rings’ is yet again a fine album full of melody and the typical Magnum ingredients. As Clarkin states the band has complete artistic freedom with their current record company and that gives the band leader the chance to stretch it out to the max at occasions. Fantasy lyrics go hand in hand with a more critical view on today’s society while musically there is as always a superb mix between the more epic songs and some heavier moments. The title track of this album embodies all these elements to the fullest including a memorable solo by Clarkin while Catley sounds a bit more rougher on a track like ,,House Of Kings’’ that has some mood swings as well (although the end of the song with the trumpets is a bit weird). As for the rest the album basically is typical Magnum, melodramatic at times with heavy interludes and as always an impressive and very colourful sound. These guys are true masters of their trade! And as long as Clarkin and Company keep delivering studio albums like this one and ‘Lost On The Road To Eternity’ they shall remain one of my favourites!