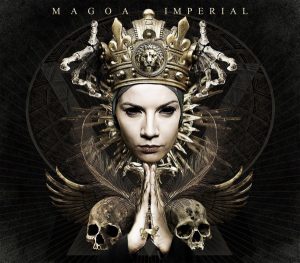 Dooweet Agency in France recently introduced me to the French metal scene, which seems booming and sprouting talent. Several bands in the French scene are boosting up each other with a constant stream of high profile releases. One of these acts is Parisian band Magoa that was unknown to me, until this new CD `Imperial’ found its way to my player. I was immediately taken by the anger-laden power that linked to my mood at the time. It would have been likely it slipped through but it simply was stuck in the moment to tickle my senses. Magoa delivers a loud and furious brand of metal that is also packed with nuances. The layers of guitars are thick and crunchy while the orchestration at times is towering towards epic proportions. Believe me; it perfectly fits the energy and package. Diversity in a furious setting, which blasts from your speakers. Check out the power of ,,Resistance’’ and the impeccable inductions emphasizing uproar and rebellion, perfectly underlined by orchestral pompous sections. Sublime arrangement that are gripping and colour the aggressive outbursts of vocalist Syd Chassagne who screams his lungs out on the largest chop of the album, fitting the anger breakdown of tracks like ,,Kill Us’’, the full frontal thunder of ,,Afterglow’’ and the impressive title track. Magoa has more up their sleeves than being an anger driven thrash combo proven in these pristine moments in which they reveal their fine feeling for drama and melody. Almost dramatic elements in the gripping ,,Faith’’ with it’s raving chants and slick chorus embedded in a dramatized setting towards the end, without ever losing its sheer power. In this light the 2 piece ,,Merge’’ and ,,Remember’’ are somewhat odd being narrated and balladesque, as were ,,Endlessly’’ is an explosion of grunts and melody captured in a mid tempo outburst of jumpy guitar extravaganza. It is exactly this cocktail of explosive styles in combination with the bands feeling for drama that makes `Imperial’ an album to give a spin or two and let sink in. Magoa comes as a true surprise with `Imperial’ being the ultimate calling card for introduction, even though it is their fourth release in succession.