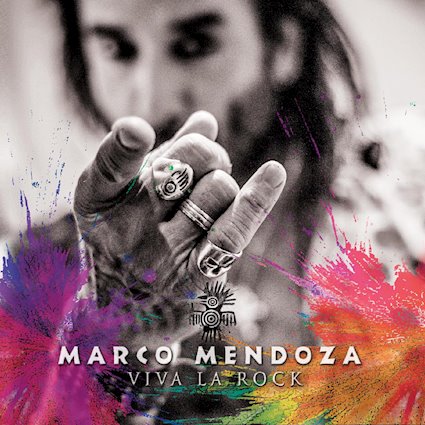 In basketball terms a player that has played for numerous teams in his career is often called a journeyman. In the rock and roll business you might call bassist Marco Mendoza a journeyman as he has played in bands like Alias, Blue Murder, Whitesnake, Thin Lizzy, Black Star Riders, Ted Nugent, Lynch Mob and Soul Sirkus, just to name some. The last couple of years Mendoza has held his own with The Dead Daisies (new CD ‘Burn It Down’ is scheduled for April). He has also found the time to record a new solo-CD on which he sings himself and he does a very reasonable job indeed. He is not a John Corabi (The Dead Daisies) but his singing is very acceptable as is this album that he recorded with drummer Morten Hellborn and guitarist/producer Soren Andersen (Glenn Hughes). Mendoza stays true to his own rock and roll roots by delivering an album that is filled with some kick ass heavy rockers, full of energy, drive and gutsy performances by the musicians involved. Especially Larsen gets a lot of freedom to supply the songs with beefy riffs and splashing solos. Quite excellent is Mendoza’s version of Thin Lizzy’s ,,Chinatown’’ where former White Lion/Freaks Of Nature vocalist Mike Tramp accompanies Mendoza behind the microphone. The only two songs that are a bit doubtful are ,,Love 2 U’’ and ,,Leah’’ (a sentimental ballad written for Mendoza’s wife). There is also a funny tribute to the dynamic duo Ted Nugent/Derek St Holmes in the form of the Nugent cover ,,Hey Baby’’. ‘Viva La Rock’ is not a record that will make you stand on your head for pure joy but it is far from a failure, as Mendoza does rock out with some very good musicians by his side and he does it in a uncomplicated, effective and just enjoyable style.