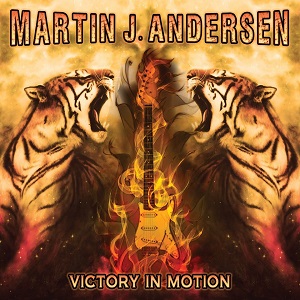 Not so long ago I reviewed ‘Deliverance At The Crossroads’, the eight album by the Danish trio Blindstone led by guitarist/singer Martin J. Andersen. A very cool and impressive heavy rock and bluesy album with tonnes of brilliant guitar work. Andersen now comes up trumps with a new album, his second solo-album after his 2015 release ‘Six String Renegade’ with the main difference that ‘Victory In Motion’ is a pure instrumental album (the other album had several songs with vocals). Martin J. Andersen only used drummer Klaus Augerbo as a back-up artist, the rest of the instruments, the production, mixing and mastering and the song writing has all been a piece of ingenious homework by Andersen, who also added some keyboards for good measure and sound colouring on top of all that. With an instrumental album I often find that after a while the whole affair starts to sound the same. Joe Satriani and Tony MacAlpine are musicians that in the past and present have managed to deliver instrumental albums that kept your attention and interest. Martin J. Andersen can be put on that list as well. By keeping the sound varied, by shifting gear regularly and especially basing his guitar melodies on a beautiful theme he has managed to compose ten songs that will keep your attention whether they rock out heavy or they have a more melancholic and haunting feel like the song ,,With Hope And Perseverance’’ that is just out of this world and for me the best of all. The way the songs have been put in sequence is also a very important point as now the variation is fully guaranteed. The playing is a bit old school yet with a nice flow. Andersen likes his classic approach. He can shred, he can play with force, he can play with feel but it is always based on a theme and melody. People that like their old school guitar slingers will find lots of material of their gathering on this album but it is not that Andersen is a copycat or just dwelling in the past. He does add his own touch to the proceedings and that leads to an in more ways than one impressive, entertaining, explosive (at times) and haunting album that will capture and impress you. I have already mentioned my favourite track on the album but I urge you if you are a true guitar lover to check this one out and discover for yourself what Martin J. Andersen with the help of a very functional drummer names Klaus Augerbo has in store for you. Not one song that can be called a filler is featured here, they are all standing firmly on their own feet and are as strong as each other. I might be a bit bold here but why the hell not? This CD beats Joe Satriani’s ‘Shapeshifting’ release on points! Definitely a highlight in its genre this year.