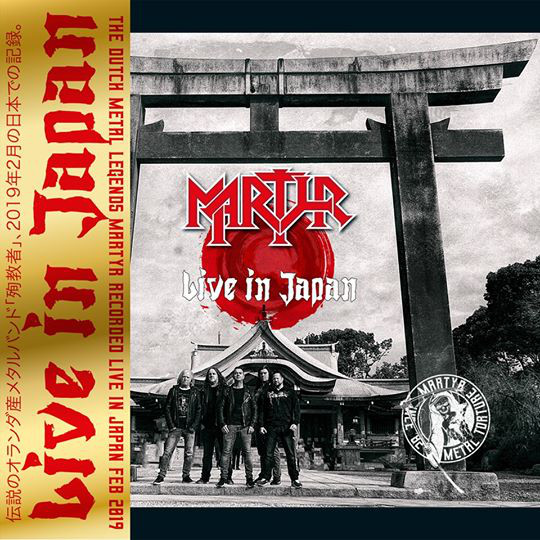 Finally, a live album from one of the most successful and hardest working metal bands from the Netherlands, Martyr. A brief history lesson first. During the five years that Martyr was alive and kicking (1982‐1987) the band released two albums that are considered ‘cult’ in the metal scene today. ‘For The Universe’ (1985) and ‘Darkness At Time’s Edge’ (1986) are classic metal, a delight for those who love strong melodies, speedy riffs and a high level of technicality. Martyr disbanded in 1987 but reunited in 2001 to play the Heavy Metal Maniacs festival [NL]. Four years later the band revived almost the complete 1982 line up to play the Headbangers Open Air [NL] and Keep It True [Germany] festivals. In 2009 the first new Martyr record in almost 25 years was released. The new EP ‘Fear’ was coupled with a re‐release of the classic ‘For The Universe’ album as a double digipack entitled ‘Fear The Universe’ on Rusty Cage Records. It was followed by a full new album entitled ‘Circle Of 8’, released by Metal Blade Records in November 2011. The years that followed Martyr kept touring and that resulted in the highly recommended album ‘You Are Next’ in 2016. In September 2017 they did their first tour in the land of the rising sun. In the meantime some line-up changes were made because all the touring and dedication to the band took its toll. Nowadays the band consists of the founding fathers Rick Bouwman (Guitars) and Robert “Rop” van Haren (Vocals) plus Rick Valcon (Drums), Geoffrey Maas (Guitars) and Vinnie Wassink (Bass) and they are responsible for ‘Live In Japan’. The album starts with ,,開演” followed by ,,Into the Darkest Of All Realms”, which is one of the five songs from that magnificent album ‘You Are Next’. The other four are ,,Infinity”, ,,Inch By Inch”, ,,Unborn Evil” and ,,Monster”. There are also two tracks of the ’Circle Of 8’ album (,,Afterlife” and ,,Art Of Deception”) and a song that, if that hasn’t been played, you know the Martyr concert hasn’t ended yet; I’m talking about ,,Speed Of Samurai” of course. That track first appeared on the ‘For The Universe’ demo in 1984 and was also the title track of their first full-length album in 1985. That year I discovered this great band from the Netherlands. If you counted with me you know there is still one song missing and that is, in my opinion, the best track of the album. From the demo ‘Metal Torture’ (1983) and the split-album Dutch Steel the guys played ,,Snow And Fire”. A song that stood the test of time easily. I’m also glad that this live album presents the current Martyr from now. You can, like for example Saxon, release a new live album with your greatest ‘hits’ every two years, but I prefer the newer material and Martyr has delivered the goods! The joy of playing splashes out of your speakers on this album which is mixed and produced by Martyr’s own Rick Valcon. Buy or Die !!!