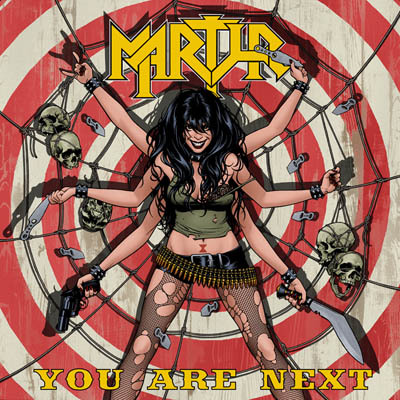 It is good to hear from Martyr again. They are one of The Netherlands oldest metal bands, hailing from Utrecht and creators of the two classics ‘For The Universe’ and ‘Darkness At Time’s Edge’ that came out in the mid eighties (both CD’s were re-issued in 2004). The main driving force behind Martyr has always been Rick Bouwman and also Marcel Heesakkers. These two guitarists more or less developed the style of the band in those days. We are now a bit further in time. In 2009 the band released ‘Fear The Universe’ followed by ‘Circle Of 8’ a couple of years later. Rick and Marcel are still there. Older, wiser and still with the right metal attitude in their veins. Drummer Wilfried Broekman has also been a long time in the band.  ‘You Are Next’ shows a very mature metal band at work. Rick still puts those weird elements in the music, but these days Martyr sounds a bit more like a combination of a thrash and heavy power metal band than they did in the eighties. According to Martyr old elements are now more combined with new influences and sounds. The most significant difference is the input of singer Rop van Haren. He really goes to town on this CD and he is the main reason that Martyr sound modern, yet raw and in a way hip. The bloke combines pure power with raw energy and that really helps the songs step up to another level. Do not be fooled by the little kid that you hear at the beginning (and end) of ,,Into The Darkest Of All Realms”. It is the beginning of a metal onslaught that we do not hear that often from bands from The Netherlands. As always the song structures are a bit complex, but that is typical for these lads. It seems that the band has a won the most votes in a competition and could be rewarded with a spot in this year’s Graspop Metal Meeting-festival in Belgium. That would be great indeed. With ‘You Are Next’ they have the perfect weapon in hand. In my humble opinion one of the best thrash/metal albums that has arisen from Dutch soil. Before I forget: does anyone remember the English band Raven and their song ,,Don’t Need Your Money”? Forget that version and listen to what Martyr has done with this song. That is how you cover a classic! By making it your own and putting your own signature on it. Jaw dropping!