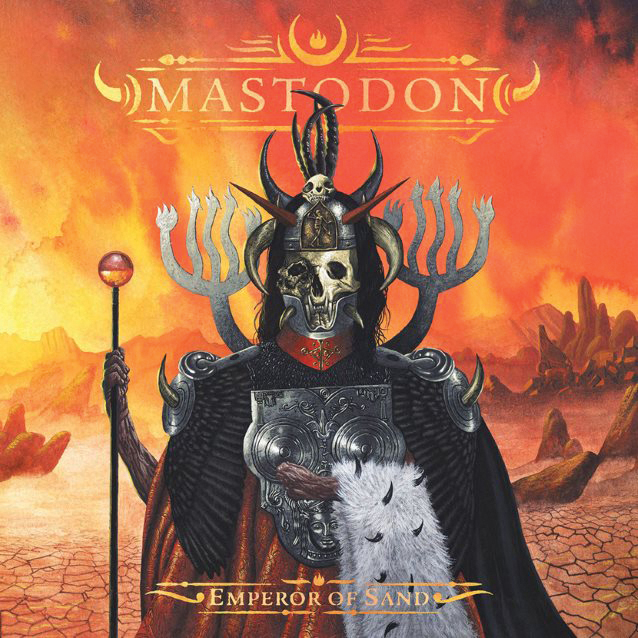 Mastodon’s new album is one that grabs you by the throat. Not only is it musically their most eponymous and driven outing, the concept of the album also grips deep lyrically. The metaphoric indulgence of the world’s most life-threatening illness, the silent murder that is cancer, is depicted lyrically and is overthrown with a carpet of noise and mayhem. An often-cacophonic impact pawing deep into the band’s rampage metal sound throws the listener of course frequently and it is mandatory to stay focused throughout the entire album. `Emperor Of Sand’ is a thunderstorm without end swirling with ominous power. Deeply embedded within the overwhelming power of the album lingers the anguish and agony healing the story of everyone’s life affected by the illness.
`Emperor Of Sand’ is a freezing cold blizzard spitting a spine-chilling swirl of emotions. Pictures of a wasteland fallen prey to mayhem and destruction remain. It is that feeling creeping upon you when this silver spinner hits your player. Speakers pumping a deep weary pulse when the sonic sandstorm is unleashed upon us. Layers of guitars push forward the howling monster. Layers of sound paste a wall of noise drenched in psychedelic syrup, sticky and sweet at times, but overall as thick and dark as molasses. Iconic are the riffs on the opening ,,Sultan’s Curse’’, cutting through the soul and rattling your backbone. Gripping and powerful tracks delivered with exquisite timing. The anger goes hand in hand with drama and agony while the band cuts through the concept of the album. Progressive tinged elements demand to stay focused. 70’s psychedelic grooves flourish in the taunting ,,Show Yourself’’ summoning the beast before releasing the troubled fury on ,,Precious Stones’’ with its immaculate melodic chorus and leading riff. Tuned in D drop and loaded with distortion perfectly underlining the agony hurling like backdraft fire, Brent Hinds unloads his magnificent and stunning sonic exercises with Troy Sander’s voice adding up nicely to the drama. ,,Steambreather’’ twists your gut with behexing and hypnotizing riffs crawling forward. It cross blends power from sludge and doom, with the weeping well of emotions reminiscent to Alice in Chains’ best moments. Whammy solos carve a 60’s green tint into the celluloid of this psychedelic melodic hymn. ,,Roots Remain’’ releases a sonic bombardment of cacophonic proportions upon the listener that harshly awakens you after the mellow mood it’s nested in. A dense atmosphere settles as the song returns to form in its almost joyous ending. The contradictive elements in the song evoke mood swings coinciding with the concept of the album. The turmoil captured within is extravagant and became trademark for Mastodon.  ,,Clandestiny’’ displays and eclectic cadence with a spawning dark presence instantly, clawing into your feelings. An astonishing and gripping dark well of emotions, depicting the life threatening underscore of the album’s storyline. Time’s running out and the pace and harsh cadence of the drumrolls are grippingly accurate with turmoil and 70’s punches added by the usage of a good’ol Moog. The cocktail served is progressive but extremely ravishing metal. Absolutely smashing is the 8-minute epic ,,Jaguar God’’ with its unleashed despair and withering tendencies, making it dark and ominous. The song ends the album in towering power unloading with every heartbeat.
`Emperor Of Sand’ is likely to be the band’s ultimate album and brand new swan song making their elusive and highly acclaimed `Crack The Skye’ look rather pale around the nose. The ravishing power of the new album is exquisite as it is powerful, leaning on the bands trademark sound and the union of souls. Their gripping and dismantling stage presence is captured perfectly in this overwhelming production by Brendan O’Brien, which grips more powerfully into your soul with every song. The towering inferno of `Emperor Of Sands’ concept is perfectly revived in this sonic bombardment, emotional gripping and taunting in presence. Mastodon is likely to be the most art rocking and inspiring band in metal today. Let’s see how this cacophony of anger holds up onstage…