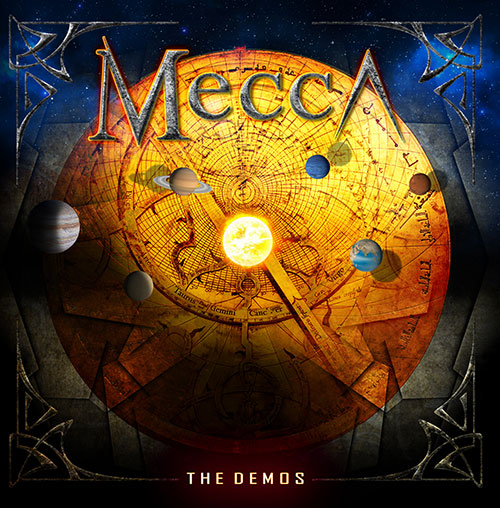 Are you into the band Mecca, led by singer/composer Joe Vana? The band has so far three official CD’s and all records had a long period of time between them. On this 2CD ‘The Demos’ Joe Vana explains the way the works and why there is always so much time in between the releases. It turns out that Vana is a perfectionist and that Mecca records several versions of songs before chopping and changing various times until the final version is being recorded. And throughout the CD some more examples of these changes show up. If you know the three Mecca CD’s this 2 CD will for sure be a must for you. First of all, the sound quality of these recordings are already of a high level, so sometimes it is hard to grasp that you are listening to ‘just’ demo versions of songs. You can also detect for yourself in which and what manner some songs were born and changed lyric wise, melody wise and in some cases were completely re-arranged. For instance ,,Morning Light’’ is the original demo for a song that later was called ,,I Believe’’, both versions just as breathtaking as the other. ‘The Demos’ clock way over two hours. It is great to hear the late great Fergie Frederiksen (he sang on the very first Mecca CD) once again on the tracks ,,I Can’t Stop Love’’ and ,,Blinded By Emotion’’, both tracks added to this compilation as a ‘rough mix’ and already sounding superb. The 2 CD holds also several instrumental versions of songs with some beautiful themes. In some of these recordings you can actually notice that you are listening to demos. Not that the sound quality is lacking or so but you can notice some experimental moves there (,,Wire 2 Wire’’). I am not sure if ‘The Demos’ has been released as a limited item. I saw on the site of the record label that this is a release especially for fans and they were mentioning that it would be limited to 1000 copies for starters, so I would suggest to go to melodicrock.com to check the availability.