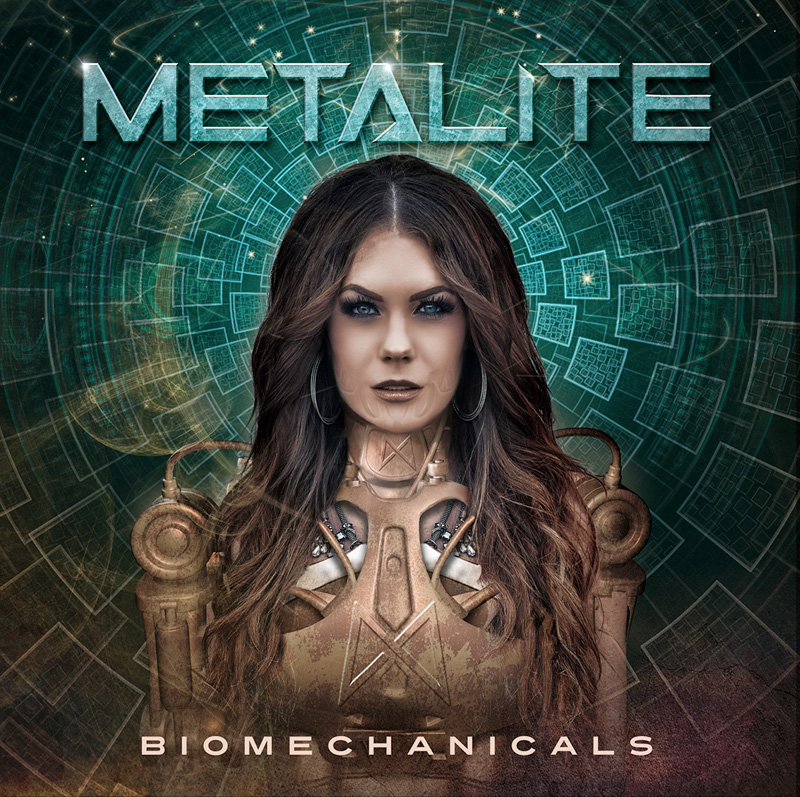 When I first saw pictures of Metalite’s new singer Erica Ohlsson fly by I thought Kate Beckinsale made her way to metal. Looking closer the comparison ended, but I was drawn to the beauty of the new vocalist, I admit. With the new album `Biomechanical’ dropped in my mail I couldn’t leave it untouched. With the band’s first album passing me by without making a real impression, Ohlsson’s addition at least captured my attention and lured me into a spin of the disc.

`Biomechanical’ differentiates from the vast majority of the female fronted genre as their lyrics distance from epic scenery and fairy tales. Metalite is deeply rooted in the modern age with their content revolving around technology and the present influences filtered down into the songs. Indeed, much like Amaranthe also fires forward. But may Metalite be compared to the Swedish metallers? Metalite differs severely from the Swedish tech-metal band. Metalite bears only Ohlsson as prime vocalist instead of 3, and the band operates in the more comfortable symphonic metallic spectre with denser and wider of rivalry. Fusing slick melodies with towering metal it pulls forward in the vein of the vast majority in that specific spectre. The genre lately is overflowing with bands and talent sprouts by the dozens. Luckily, Metalite is gifted with the essential talent in order to survive.
Though the band is not able to differentiate from most bands in genre, they execute with grace. ,,Far From The Sanctuary” immediately delivers with the genre specific elements in place. Towering keys go along up with the slick riffs accompanying the melody-line, which is ear mingling and instantly sticking. Guitarists Premberg and Ömesved fire on all engines and shift with tremendous feeling in their riffing and soling. The pumping bombast is in full swing with Erica adding her superb vocals. Not switching to soprano, but lower with more subtle melodic rock shouting. The choruses are simple, effective and nesting. The symbiosis of the Amaranthe technological outline combined with more epic metal ingredients gels well as showcased on the high quality techno metal tune ,,Apocalypse”. Absolutely astonishing is the dynamic deliverance of drummer Lea Larsson, who injects the music with swagger, without going all-progressive. The music progresses with time changed and smart hooks thrown in, and Larsson manages to lay down an effective yet intrinsic performance. Especially her double bass and floor tom interaction is phenomenal. It adds the needed punch. Check out her keen drumming on the title track, which also flourishes with impressive guitar hooks and breaks. The technological sound effects add extra value. Keys are also added in great volumes mandatory to keep the pompous bodywork upright. It is all very predictable, but it radiates quality, even though it is also far from original ,,World On Fire” could have been featured on any other album in the genre, which goes for most of the tracks. The band however also fires some top-notch tunes upon us, like the dramatic but very intense ,,Breakaway”, or the progressive punched ,,Rise Of The Phoenix” which again spotlights Lea’s impressive drum performance and the band’s feel for melody. More techno-injected is ,,Social Butterflies”, with Ohlsson displaying a rougher edge to her vocals, or the dynamic ,,Mind of a Monster” and ,,Victory or Death”.

Though remaining on the safe side rather than going all-experimental, Metalite creates a perfect jumping board to take the plunge on their next albums. They are still one of many, but definitely execute their music with passion. It all fits perfectly, but I constantly have the feeling there’s more in it. That being said, the name Metalite covers the load perfectly; much like a beer has its Lite versions nowadays, Metalite is the Lite edition of genre defining acts. However, unlike the beer, it is still highly enjoyable.