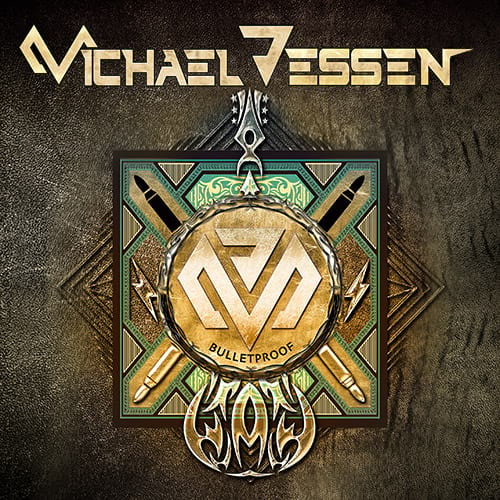 Michael Jessen is the guitar player that made name with his band High Octane in the past. For his debut album Jessen teamed up with one of melodic rock’s finest vocalists; Göran Edman [Yngwie Malmsteen, Madison, Brazen Abbot, Signum Regis, a.o.]. `Bulletproof’ is the outcome of this collaboration, only recently released by Melodic Rock Records.

Jessen is a capable guitar player and he more than once proves his skills on this debut release. Good melodies, excellent riffs and great solos are present, as is the typical voice of Mr. Edman of course. Edman’s typical, somewhat nasal sound uplifts the album that progresses in a slightly dull manner and it doesn’t make Goran delve all too deep to bring out the best of him. The songs are all too predictable and lack the kick and the push to make them standout in this genre of predictable paths. I know it is tough to standout in AOR and melodic rock, especially as there’s little to no surprises to be pulled. However, releases by Creye and Taste have proven there’s a lot of joy to be found in perfectly executed melodic rock tracks. Now musically Jessen does bring some fire to the plate. Listen to his piercing solos and fine feeling for melody [,,Coming Home Tonight”] but overall the music suffers from a blues pace that doesn’t bring out the best in Edman’s vocal abilities. It somewhat soars along. It just doesn’t lift off and I get the feeling Edman/Jessen simply is a miss match that is the root cause of this. Though the production is transparent and clean, it also comes across rather clinical, demising the last piece of enthusiasm needed to sparkle. It is all too decent and doesn’t get me psyched. ,,Like A Game” could have been a game changer with its narrative opening and building turmoil. The song brings power to the plate and would have benefitted from a more powerful production. Cliché lyrics also don’t help the album lift off, and it just strands in mediocrity.

As a fan of Edman’s work, I really looked forward to this album. Several spins in, not one of the tracks really had me excited and that is a shame. Jessen is a great guitar player, but his songs don’t bring out the best in Edman unfortunately. Nope, this collaboration isn’t bulletproof…