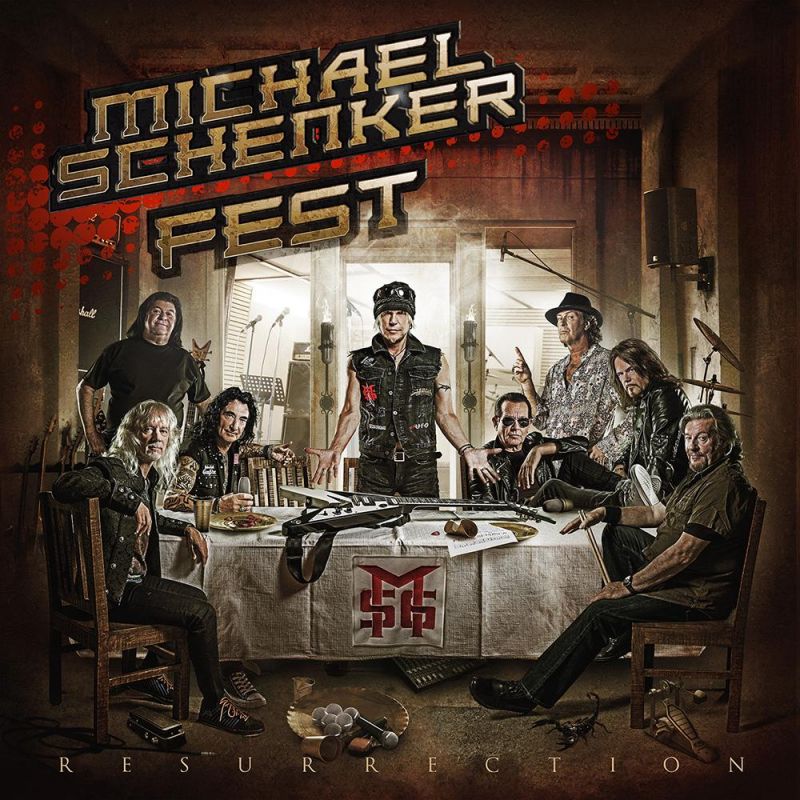 February 8, 2018 by Michel van de Moosdijk - More about our team

The idea to get his old bandmates Chris Glen (bass), Ted McKenna (drums), Steve Mann (guitar/keyboards), Graham Bonnet, Robin McAuley and Gary Barden (all vocals) together has worked out better than Michael Schenker could ever imagine. Under the name Michael Schenker Fest the veterans toured in Japan, recording and releasing a live CD and DVD. At the time of the release of the DVD and CD I remember writing that this project might not last, but more fool me, I was completely wrong. Michael Schenker toured with this outfit also through Europe and received great critics by press as well as from the audiences that came to the shows. So why stop now? The musicians got together again for a new studio CD and also the singer of Michael Schenker’s Temple Of Rock Doogie White got involved with the project. ‘Resurrection’ is the result of all this and credit where credit is due: this is by far the best record that Michael Schenker has recorded in a long time. The twelve songs on this record bring back memories of the days gone by. Quality songs, sometimes surprisingly fast and furious with very inspired guitar work from the old master indeed. I think that especially the driving force of Ted McKenna and Chris Glen is largely responsible for the heaviness and pace of the album. These guys are a solid machine and they know exactly where to lay their accent in a song. With four different lead singers at hand it is clear that ‘Resurrection’ offers a lot of variation in the vocal department. On the rockers ,,Warrior’’ and ,,The Last Supper’’ the four lads combine their singing but each vocalist gets his solo spot on the album. I have always liked the albums that Schenker made with Robin McAuley and Steve Mann at his side but also the record (‘Assault Attack’) that was created with Graham Bonnet behind the mike was a highlight, not to mention the first two with Gary Barden, who does, I must admit, surprisingly well on this CD as he was by far the weakest link on the live CD/DVD. And Doogie White is a class act, as we all know. Then there is Steve Mann. His brilliant keyboard display on ,,Take Me To The Church’’ is just breathtaking, that song being the absolute highlight on this CD with Doogie White and ‘der Michael’ shining like never before. It shall not surprise you that this CD also has an instrumental song (,,Salvation’’) included as that is more or less a tradition. This combination has worked out well, as ‘Resurrection’ is without a doubt the most inspired Michael Schenker record since ages and it hopefully gives him the confidence and wisdom to make the right choices for the rest of his career. I mean he has probably had more different musicians in his band than anyone else. Personally I believe that when this project has reached its end Michael Schenker should keep Glen and McKenna on board as well as White and hopefully Mann. Maybe that way Michael could make a real ‘Resurrection’, but this one is already better than I had ever dared to hope for.