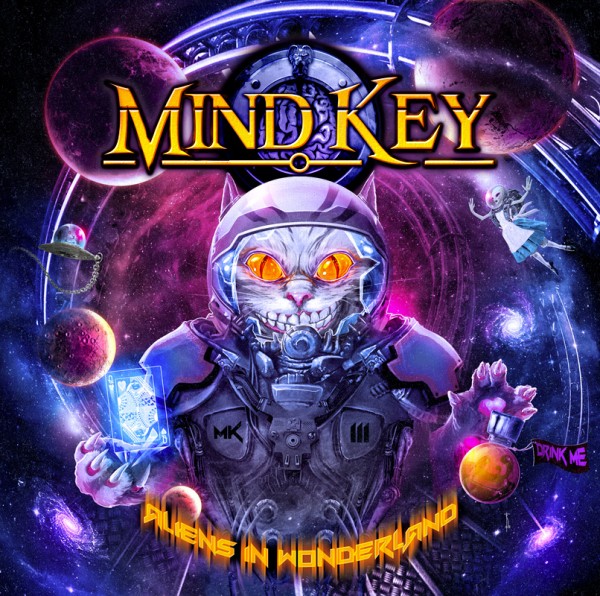 Little hazy I went through my old albums and found this to be the Mind Key that dropped 2 albums over a decade ago. Though the line up only features founding member Dario De Cicco, the band revives the musical blend of their past.

Admitted it took me a couple of spins to get used to new vocalist Aurelio Fierro, Mind Key delivers an impressive album that tends to grow on you. Their album is studded with swirling keyboard and guitar interaction, balancing on the thin line between hard rock and heavy metal. Big hooks and towering melodies with pumped choruses and choirs that are sticky and sweet, ,,Alien In Wonderland” offers the exact ingredients that Mind Key pulled from their past. With Aurelio adding a somewhat distracting raw vocal sound amidst the slick melodies and sticky harmonies, it also enables De Cicco to steer his musical vehicle in a more power metal-ish direction at times. As pace shifts upwards, it is the comfort of fierce riffs and powerful harmonies that boost Fierro to deliver matching metal vocals. That being said, it is also challenging to get used to his raw and rough toning.
The mega melodic harmonies and memorable hooks frequently suffer from his spiked vocals, though after a few spins one gets more comfortable with it. However, if Dario opted a more comfort oozing vocal presence, Mind Key could have easily orbited onto many melodic rock aficionados’ list of favourites of this year. The tasteful orchestrations and ear mingling melodies are sometimes astonishing and the interaction of keys and guitars is absolutely sublime. The symphonic orchestration adds to the pompous power and adds another dimension pushing the band towards the epic metal genre. Songs like the varied ,,Angry Men” and the heavy progressive ,,Be Polar” and ,,Non-Existence”, which are simply magnificent, though take time to nest. ,,Oblivion” is a frail piano ballad with modern pop elements with Fierro fitting in but also falling out of comfort. Same he does in the generic crafted ,,Vertigo”. The title track is a benchmark tune displaying the wide array of musical entropies injected. ,,Hank (The Blazing Eyes)” is a daring track pushing the envelope and displaying Dario’s craftsmanship as composer and arranger. Though Fierro’s voice adds to the power of the tune, it still needs time to get used to.

Mind Key’s third effort is an album appealing to a wide audience likely. It needs time for you to get used to the vocals, and some won’t actually catch it at all. Though I’m one of those last, I also hear the beauty of most of MKIII’s compositions. It’s a love it or leave it album you at least have to check.