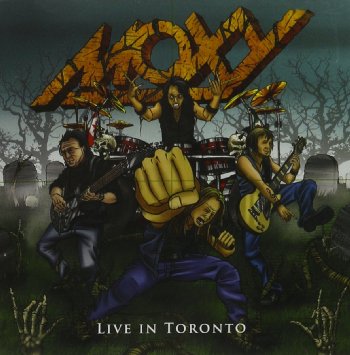 Two albums within one year! That is what Moxy from Toronto, Canada has released. The band started in 1974 and released four albums (‘I’, ‘II’, ‘Riding High’ and ‘Under The Lights’) before more or less fading away. The first three albums were sung by legendaric frontman Buzz Shearman (who died early at the age of 33 after a motorbike accident), the fourth by Mike Reno, who later founded Loverboy with a lot of success. Guitarist Earl Johnson kept Moxy more or less a bit alive and the band started again years later with singer Brian Maxim, with whom they recorded again a couple of albums. During that period also drummer Bill Wade died, as did original bassist Terry Juric. Yet again Earl Johnson kept on going and that has resulted in a new line-up with second guitarist Rob Robbins, drummer Alexis Von Kraven and singer Nick Walsh (ex-Slik Toxik). It means that Earl Johson is playing rock and roll/ heavy rock music with guys that are old/young (take your pick) enough to be his sons. The album ’40 Years And Still Riding High’ is a compilation of the first three albums, but all the songs are freshly recorded and have some new arrangements. ‘Live In Toronto’ was recorded in September 2013, so it is a bit strange that it has been shelved for close to two years. Anyway, ‘Live In Toronto’ is just as ’40 Years And Still Riding High’ a trip down memory lane with old tracks like ,,Fantasy”, ,,Midnight Flight’’, ,,Sail On Sail Away”, ,,Another Time”, ,,Out Of The Darkness’’ and ,,Can’t You See I’m A Star”. The performance is good, although Walsh sometimes has some problems interpreting the songs. It is a different style compared to what he used to do with Slik Toxik. He is doing okay, but convincing? No. Critics might say the style of Moxy is too old fashioned, and maybe that is the case. But I like this band, always have, always will. As a bonus there is a new version of ,,Another Time’’ on this release, with the addition of an orchestra. Also the cartoon type cover of the CD is nice. But I am wondering what the future might bring. Surely there must be room now for new songs, as all the oldies have been re-recorded. You can’t keep reliving the past. As one of the best Moxy songs says: ,,Time To Move On’’!