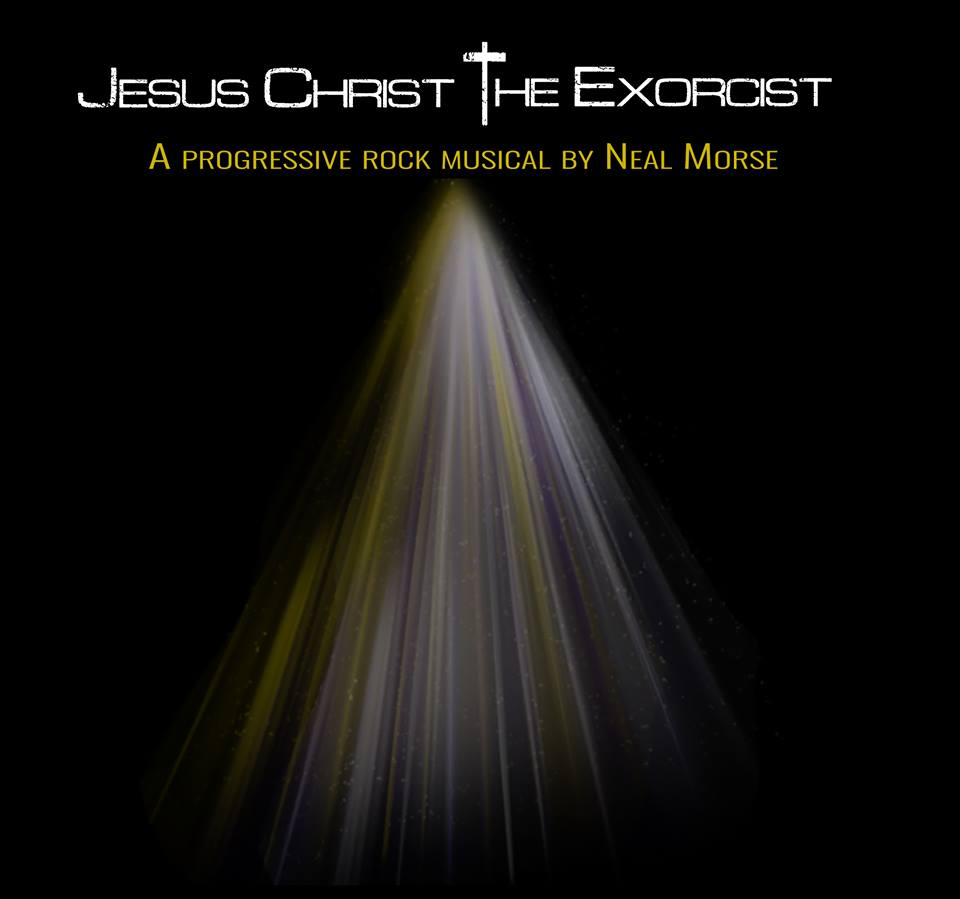 It is public secret Neal Morse found his faith in the word of God some time ago. It was a choice that shook his fan base and left them with questions, only answered upon releasing his live footage `Testimony’, later to be followed by a variety of albums with numerous acts and super groups to unload Morse’s musical brain screws. It wasn’t however until the release of his acclaimed solo albums `Final Experiment’ and `Similitude Of A Dream’, that fans and journalists worldwide re-experienced the musical genius of Morse exploring his boundaries with staggering and inspired songs.

With the buzz maintaining to surround Morse, he recently dropped his most elusive project of all, the rock musical he has been composing and writing over the course of a decade. With summer of 2019 abound, `Jesus Christ – The Exorcist’ finally sees the light of day. Subtitled `A Progressive Rock Musical by Neal Morse’, `Jesus Christ – The Exorcist’ is by far Morse’s most compelling and monumental record to date. The story was brought to Morse’s attention by his close friend who returned from the Jesus Christ Superstar performance and challenged Neal to re-write and re-arrange the concept, ‘as an epic rock piece based upon the gospels’. It was the seed planted in Morse’s head that grown over the course of time and grew deeply attached to his being and his faith, with this impressive album as result. “Impressive” is the perfect word to cover the load. The musical unravels with towering grandeur and it sparks tremendous power, without overthrowing. The album is shot into motion with sheer bombast and ethereally meandering forward during the Celtic tinged ,,Introduction”, followed by the pompous instrumental prog track ,,Overture”. Morse goes full rock on ,,Getaway”, first revealing the band’s all-star cast. Powerful chanting choirs in the best Andrew Lloyd Webber tradition take it forward, reminiscent to Kayak’s epic rock opera’s `Merlin’ and `Nostradamus’, it is injected with the right amount of bombast and towering musicianship. Morse and Kayak’s Ton Scherpenzeel both have the exquisite finesse arranging and composing a magnum opus that keeps you on edge throughout the entire journey. Both manage to embed the storyline deeply into the musical character of the songs, which enrols and evolves over the course of the album. Keenly interlaced with musical sub notes drawn from the region and era the story took place. It is this genius touch that adds up in little bends and twists as the plot thickens. With Morse’s story based on the gospels and, to my feeling, pulled into the modern era, the project reveals the timeless touch of the word. Now I’m not a practicing Christian, but the overall appeal of the album and the performance is so alluring and enticing, that it won’t leave you unaffected. Not preaching the gospel, nor brainwashing in any sense of the way, it is much as Jesus Christ Superstar was; widely appealing to a varied audience of music aficionados. Musically the concept is vividly breath to life with perfectly dosed drama. Narrative vocal sections alternate with larger than life choirs, dramatizing the story with towering perfection. Touching slow sections pick up after blistering solos fusing songs together paving way for stellar vocal interactions of the cast. Heart touching ballads with welling emotion and towering keys adding drama (,,Jesus Baptism”), are overloading the listener as it shifts gear in corky progressive jazz-injected rock tunes such as ,,Jesus’ Temptation”. The contrast is immense, yet it all fuses perfectly as Morse guards the concept extremely well. Though it is diversifying from his regular walked path of prog, it fuses his entire past catalogue with the musical specifics Webber benchmarked over decades. Operatic eludes, piano and pompous sections with rousing ensemble pieces interlaced with classical arrangements. Typical dramatic Broadway type tracks push the musical envelope of Morse masterminding the mould for the story that is one Christians are familiar with. Luckily non-believers will have Morse’s typical lyrical play to wrap their head around. Even though it has the gospels embedded, it won’t conflict with your personal standings as Dr. Morse hands down a musical staggering endeavour that is on par. Diversity is key to the keenly woven concept. Oozing ballads like the touching ,,Free At Last”, the exquisite vocal duet ,,Hearts Full Of Holes” that also spotlights the gelling synthesis of the cast’s vocalists. ,,Mary At The Tomb” is welling with emotion and flourishes as it rolls into the staggering and dramatic orchestrated ,,The Greatest Love Of All” which packs typical Jim Steinman (‘Pandora’s Box’-days) subtlety over powerful melodies. Again it displays phenomenal duet interaction. But there’s so much to enjoy on this album.
Progressive turmoil is laid upon us with ,,The Madman Of The Gadarenes” with impressive and bedazzling musical marksmanship also displayed on the steep and blunt prog track ,,Gethsemane”. Morse and his men go rocking out in its purest contemporary 70’s rooted sound with ,,Better Weather”, and the albums impressive reprise. On the other hand the album features an uplifting spirit contrasting with the dramatic plot turns. It is these colourful songs with highly melodic choruses that inject warmth and accessibility to `Jesus Christ – The Exorcist’. ,,Love Had Called My Name” is drop dead gorgeous and ,,Jerusalem” fuses joyous choirs with Broadway benchmark allure.

Rocking out within a metallic frame like on ,,There’s A Highway”, ,,Get Behind Me Satan” with its spitting riffs and solos, the band brings tremendous poise to the pace. Ravishing beautiful are the cinematic Broadway musical sections ,,The Keys To The Kingdom”, and the ,,We Will Rock You”-themed ,,He Must Go To The Cross’’ with its stomping beats and choirs over the stop ‘n go motion laid down by the guitars as well. Stunning is the cello driven ,,Judas’ Death” held together by pompous prog hooks glued to the majestically classic string arrangements. The song is short and pointy but unloads with dramatic vocals and towering piano and strings. The song is followed by one of the most monumental tracks of this musical; ,,Jesus Before Pilate And The Crucifixion”, that marches into form to unload gripping and gut wrecking passion and drama. It adds up to the grand finale and upon the dying tones of the 2nd CD you will be left behind flabbergasted, reaching repeat.

Thick layers of instrumental perfection orbit the tracks and concept, over a 2-disc journey. It is Neal Morse’s signature sound and musical genius approach that makes this album tic. From the intro onwards it evolves with passion and style, making the acclaimed `Jesus Christ Superstar’ look rather pale, without dismissing it as a classic. The outcome of `Jesus Christ – The Exorcist’ is exactly what Morse was challenged to. Turn the gospels into a modern progressive rock musical with operatic allure. Genius!