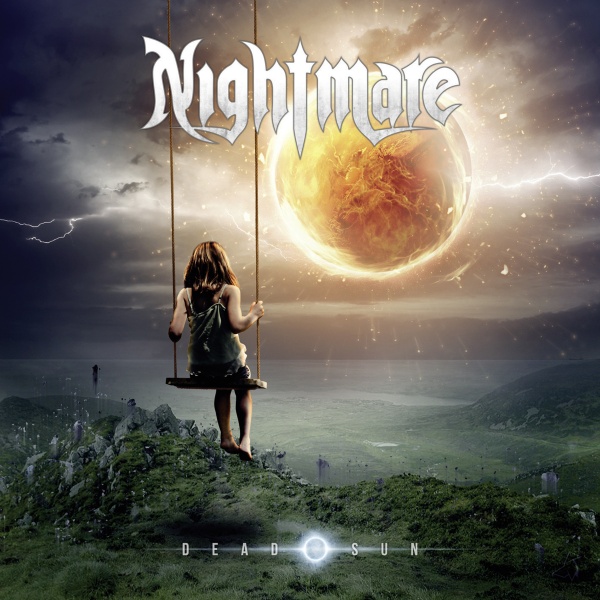 Founded in 1979 French heavy metal pioneers Nightmare have been an integral piece of the European metal scene for the past three decades. Releasing their debut album `Waiting For Twilight’ in 1984 and their sophomore release `Power Of The Universe’ in 1985, both benchmarks for French and European bands in that era. After an extended hiatus, Nightmare roared back onto the scene with `Astral Deliverance’ in 1999 as former drummer Jo Amore assumed his new role as the band’s vocalist, handing over the drum duties to his brother David Amore. In this new line up the band released a stream of albums mostly underrated and overlooked in the genre. With `Dead Sun’ the band reports back in their most interesting line up to date, featuring powerhouse vocalist Maggy Luyten who stepped in on `The Burden Of God’ and uplifts the band true metal sound with her pristine vocals. A match made in heaven. Luyten brings power to the plate and her wide and impressive range is the perfect step up to long awaited acceptance within the metal community. `Dead Sun’ features all the main ingredients from the bands long spanning career…. And then some! Drums are powerful driven and progressive tinged and the bands trademark twin guitar riffing remains intact. Matt Asselberghs and Franck Milleleri propel the Nightmare through the darkest nights spitting jaw dropping riffs and hooks. ,,Tangled In The Roots’’ might just be one of the best melodic metal tunes of the year because of this generic partnership. But it’s especially the fore mentioned Luyten who manages to instantly grab the spotlights. The petite Belgian has grown and seasoned over the years from her debuting days in Virus IV onwards, contributing to outrageous metal acts and projects including Epysode and Ayreon. `The Burden Of God’ already revealed her leading role but on `Dead Sun’ Magali belts the impossible. Her loud roars in combination with her perfect feeling for melody and drama is furthermore crystalized on this new album and the magic at hand is simply breath taking. Luyten has grown to a grande dame as I predicted a decade ago, but with Nightmare she found the band to take her to the next level and in the meantime also take the band to its ultimate high. `Dead Sun’ contains a collection of wonderful and powerful metal songs with never a dull moment. No fillers, just thrillerz!
The album is packed with energy and fine melodies that nest inside your brain upon the first spin. The crystal clear and powerful production of Liotard and Van den Broek adds up to poise of the bands overall sound making `Dead Sun’ one of the better releases of this heavy metal year slowly reaching the finish line.